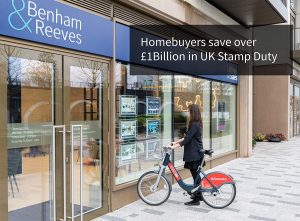 The latest property market analysis by London lettings and estate agent, Benham and Reeves, has revealed the full extent of how the stamp duty holiday impacted the capital’s property market, saving London homebuyers over £1bn since it first launched at the start of July last year.

Last week, the government released its latest house price index providing the first concrete view of the market in September of this year when the curtain finally fell on the stamp duty holiday.

Benham and Reeves analysed sold price records across nearly 87,000 London property transactions to reveal how much homebuyers saved in stamp duty and which boroughs benefited the most.

The research shows that London homebuyers saved just shy of £1.015bn in stamp duty during the first phase of the stamp duty holiday when the tax was removed on home purchases up to £500,000 between 8th July 2020 and 30th June 2021.

When this threshold was then reduced to purchases up to £250,000 between 1st July 2021 and 30th September 2021, London saw a far lower level saved, but homebuyers still benefited to the tune of £4.3m – the fourth largest saving across all regions of England.

As a result, the capital’s homebuyers saved a total of £1.019bn in stamp duty fees throughout the duration of the holiday.

Despite only seeing the fifth largest number of transactions of all English regions during the SDLT holiday period, London still ranks second overall where the largest total stamp duty holiday saving is concerned – with just South East seeing a larger saving.

Wandsworth is the borough where London homebuyers pocketed the biggest stamp duty saving. In total, buyers across the borough saved £65.8m throughout the duration of the holiday, 6.5% of the total saving across London.

“We simply didn’t see the mass hysteria of a potential stamp duty saving grip the London market in the same way it did across the rest of the UK, but despite this, London still saw the second largest saving of all regions in England.

Much of this saving came during the first stage of the holiday when the threshold was more meaningful to the London market but the capital’s homebuyer still enjoyed the fourth largest saving during the second phase of the scheme.

This is fairly impressive given the fact that the region was moving at a far slower pace than the rest of the nation and really demonstrates the value of London bricks and mortar, even when the market isn’t firing on all cylinders.

When analysing the market by borough the pandemic influence of the last 18 months or so is clear to see. Transactions and, as a result, the total stamp duty saving were far higher across London’s more peripheral boroughs where buyers were able to buy bigger and with more outdoor space.”