Staging your home could add £47,000 when selling 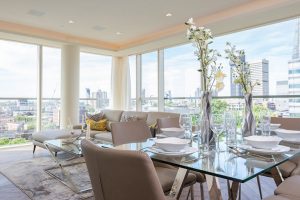 The latest property market analysis by London lettings and estate agent, Benham and Reeves, has revealed that staging your home during the selling process could boost your sale price by as much as £47,000.

Staging is generally considered to be an American property market import, but it really just requires a few finishing touches in addition to the work we already put in before placing our homes on the market.

The general approach to staging is to give your home a full overhaul including neutral paint jobs, sorting the garden, decluttering and cleaning.

However, staging also focuses on the small details. Replacing cupboard handles or updating taps and tiles, utilising mirrors to create the illusion of more space, making the beds and the dining room table, buying matching towels, cushions and pillowcases – the list of these minute touches can be endless.

Whether you do it yourself or call in a professional staging company, there’s a general rule of thumb to follow to avoid overspending while adding real value to your home.

First off, you should set your staging budget at one per cent of your properties market value. That’s £2,642 on the average UK home.

However, if done correctly, staging can boost the price achieved for your property by 10%, that’s an additional £26,424 for the average UK homeowner.

That means that the average UK home could sell for £288,026, £23,782 more than the average home – and that’s after you’ve taken the initial cost of staging into consideration.

Even in the North East, a well staged home could still command £13,414 more in current market conditions.

“Property staging is becoming incredibly popular within the UK market and it’s something we not only encourage our sellers to do but also our landlords. It provides the small additional touches that may seem insignificant on their own, but together they really add the wow factor for those viewing a property. In fact, 86% of the rental properties we dress for the market on behalf of landlords, rent within a week and generally secure a higher rental price as a result.

We’ve found it to be particularly effective in the current London market of late where the stamp duty holiday hasn’t quite had the same impact. While we’re starting to see momentum build now, the capital has generally been much quieter over the last 12 to 18 months and so staging is a real differentiator for landlords and sellers.  Over the years staging has helped hundreds of our landlords and sellers get more money and faster conclusions by standing out from the crowd.”