Home Press releasesProperty marketLondon’s most active postcodes as £2.5bn worth of homes sold per month across the capital 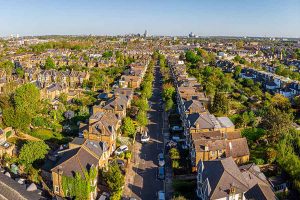 Research from London lettings and estate agent, Benham and Reeves, has revealed which of the capital’s postcodes are going against the grain of an otherwise muted London market, with the highest levels of homebuyer activity.

Despite the London market trailing the rest of the UK where the pandemic house price boom is concerned, the average house price in the capital is now £526,183. With an average of 4,813 homes being sold across London each and every month, that’s £2.5bn worth of bricks and mortar changing hands between homebuyers and sellers on a monthly basis.

When it comes to the most popular London postcodes, Croydon ranks top, where 84 homes are sold per month within the CR0 postcode.

Wandsworth SW18 postcode is also proving popular, with an average of 69 homes sold per month, while the boroughs SW11 (55) and SW17 (50) postcodes also make the top 10.

Merton’s SW19 postcode is the third most popular pocket of the London property market at present, where an average of 63 homes are selling per month.

With 63 property purchases per month, E17 in Waltham Forest is currently the most in demand area of East London, while Hackney’s N1 postcode isn’t far behind with a monthly average of 55 homes sold.

The SW6 postcode of Hammersmith and Fulham sees £45.2m worth of property sold on a monthly basis, with Wandsworth’s SW18 (£45.1m), SW1 straddling Westminster and Kensington and Chelsea (£44.6m) and SW19 in Merton (£44.3m) also seeing more than £40m worth of homes sold each month.

“London has been brandished as the nation’s worst performing area of the property market over the last two years, with pandemic complications leading to a muted level of market activity which has also dampened house price growth when compared to the astronomical rates seen across the rest of the UK.

But as is often the case with any topline look at the property market, this broad view of London’s performance doesn’t tell the whole story and there are plenty of postcodes within the capital that are currently enjoying a robust degree of demand from homebuyers.

It’s also important to note that while house prices haven’t increased by the same margin as the rest of the UK, they’re still up 8.2% in the last year. As a result, the capital remains head and shoulders above the rest in terms of house price pedigree, with £2.5bn worth of property changing hands on a monthly basis.”