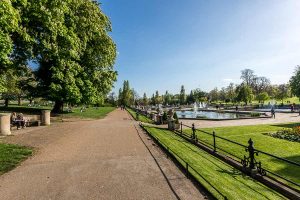 Research from London lettings and estate agent, Benham and Reeves, reveals that while homebuyers will, on average, have to pay 50% over London’s average house price to live near one of the city’s great parks, there are still some great parkside deals to be found where prices are up to -9.6% below the city average.

There are a staggering 3,000 parks across the London and Benham and Reeves has revealed just how much it will set homebuyers back if they want to live within arm’s reach of the 13 biggest and best.

To live near one of London’s 13 most popular parks comes with a hefty price premium. Homes near London’s most renowned outdoor spaces sell for an average of £896/sq ft which is £292 more, or 48.5%, above the wider London average.

The most expensive London park to live near is Kensington Gardens, home of Kensington Palace and the Royal Albert Hall. It’s as prime as the Prime London housing market gets and homes here sell for an average of £1,474/sq ft which is 144.2% above the city average.

Homes near Green Park, with Buckingham Palace on one side and Piccadilly on the other, sell for £1,408 which is a premium of 133.2%, while Hyde Park commands a premium of 132.6%.

While parkside life in these locations is reserved for only the wealthiest of buyers, there are some great London parks where homes can be snapped up for much more reasonable sums.

The most affordable of London’s top parks is Crystal Palace Park, South East London’s pride and joy which was initially created as a Victorian pleasure ground and, until its famous fire in 1936, home to the majestic Crystal Palace exhibition building. Nearby homes sell for an average price of £546/sq ft which is -9.6% more affordable than the wider London average.

Bushy Park in Richmond commands a premium of just 2.2%, and homes near Greenwich Park are priced just 6.2% above the London average.

“London’s parks are one of its greatest attributes, helping rank the capital in the global top ten cities for green space. Many of these parks are small, hidden gems, but the ones contained in this list are among the greatest the country has to offer, so it’s no surprise that nearby house prices tend to be so incredibly high.

Despite this, there are still some great parkside deals to be found, though it’s worth bearing in mind that because demand for open space living is so high at the moment, properties are going to be hard to come by and so competition is going to be stiff.”

House prices set to rise by another £14,000 before the end of the year