Benham & Reeves and the 10K run

With 25,000 runners performing their best at the recent London 10k run, the UK’s most prestigious road race, Kenyan athlete Edwin Kipyego emerged as the race winner in a time of 27:49. Entrants from all around the world came to be part of the experience including Vidhur Mehra from central London rentals agency Benham and Reeves Estate Agents who completed his debut run in just 1 hour 57 seconds.

Over 250 people attended the sell-out ‘Casino Royale Summer Bash’ which was sponsored by the well-known lettings agent, helping to raise funds for The Liangshan Schools Trust, Nirvana School in India and Noah’s Ark Children’s Hospice. 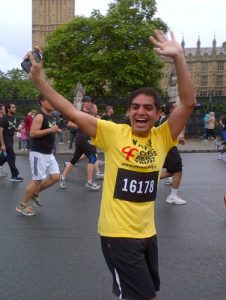 Vidhur, Finance Director at the agency raised £11,084 for the Cystic Fibrosis Trust after successfully completing the 10k run, the UK’s most prestigious road race which weaved its way through central London, passing iconic landmarks such as Big Ben, the Houses of Parliament and St Paul’s Cathedral.

“The run was a huge challenge for me,” comments Vidhur. “And while running isn’t really my thing, I felt it was important to do all I can to raise money for the CF Trust. The Trust receives no Government funding but does so much to support sufferers of this life-threatening disease.”

“I would like to thank everyone who has sponsored me and helped me reach my target. Many clients, other agents, friends and family all pulled together and I really am humbled by the generosity that everyone has shown. But in answer to those who have already asked, no, I don’t think I will be doing another run anytime soon, I will stick to number crunching.”