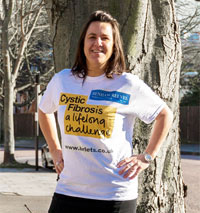 Dealing with property problems is a challenge in and of itself. From faulty boilers to leaking taps, Benham & Reeves Lettings Property Manager Catherine Close has seen it all. This April, though, Catherine is tackling an entirely new challenge by running her first ever marathon. She will take part in The Virgin Money London Marathon on Sunday, 26 April in aid of Cystic Fibrosis Trust.

To help Catherine kick start the £2,000 minimum sponsorship needed, her Property Management department colleagues held a dress-down day on 2nd March and brought in a variety of cakes and snacks that could be purchased to raise funds for the charity. The effort raised £101 and with other donations flooding in from across the company’s 16 branches worldwide, the fund has already reached £900. Over the next few weeks, other Benham & Reeves Lettings offices will be holding similar fundraising events to help Catherine reach her goal.

Catherine is running the marathon in support of Benham & Reeves  Estate Agents chosen charity, Cystic Fibrosis Trust, a charity that is wholly reliant on private donations. Cystic fibrosis (CF) is an inherited respiratory disease affecting 10,000 people in the UK. The incurable condition clogs the lungs and digestive system with a thick, stick mucus. People with cystic fibrosis typically live between 37 and 50 years.

Anita Mehra, Managing Director at Benham & Reeves Estate Agents adds, “We’re really happy to be supporting Catherine as she trains for The London Marathon and in her fundraising efforts. Catherine has set herself a formidable challenge on both fronts but knowing Catherine like we do, we have every confidence in her abilities and we’ll be cheering her on every step of the way.”

Donations can be made via Catherine Close’s fundraising site:
https://www.justgiving.com/BR-Residential-Lettings/