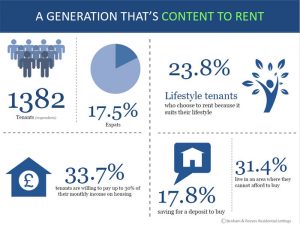 With property prices at record levels, house prices in many parts of London are ten times workers’ salaries and in the most expensive boroughs, are 20 times workers’ salaries. It is widely assumed that would-be home buyers will not be able to purchase a property of their own without relying on the so-called Bank of Mum and Dad. While these tenants certainly do exist, Benham & Reeves Estate Agents’ latest tenant survey threw up some surprising results that confound many of the assumptions about why tenants choose to rent.

Nearly 1,400 tenants or 33% of all the firm’s current tenants responded as part of the largest survey Benham & Reeves Lettings has conducted in its 50 year history. The responses, which were overseen by professional researchers, covered a number of topics from housing costs to desirable amenities.

House prices in London are some of the most expensive in the world and continue rise. Wage inflation has not kept up with property price growth, making it more difficult than ever to gain a hold on the housing ladder. With the UK population anticipated to grow by a further 10 million and an on-going house building shortage, more and more people are being forced into the private rental sector. The survey reveals, however, that not all are unwilling tenants and even those who are seeking to buy eventually are choosing to rent more luxurious properties knowing they are going to be living there for many years.

Reflecting London’s diverse workforce, many of the respondents (17.54%) were expats living and working here. Few of these tenants intended to buy in London, presumably because they planned to eventually move back to their country of origin or another posting abroad. Only a small percentage said they did not meet the criteria for a mortgage (3.66%) or did not have a mortgage deposit (5.76%) while 17.8% of respondents were actively saving for a deposit.

Over half of the respondents could be classified as lifestyle tenants. Nearly a quarter of all tenants (23.82%) replied that they chose to rent because it suited their lifestyle or they didn’t want a mortgage while nearly a third (31.41%) said they chose to rent because it allowed them to live in an area nicer than the one in which they could afford to buy. What is more, a third of respondents (33.77%) stated that they were only prepared to commit 20-30% of their monthly income towards housing. Another 11.78% said they would only commit a maximum of 20% of their income towards housing costs.

“I think that in labelling Millennials as Generation Rent, the older generations are prescribing their own values onto the younger one. Whereas Baby Boomers or Generation X craved the stability and financial security of home ownership, today’s young professionals see things differently,” explains Benham & Reeves Estate Agents, Director Marc von Grundherr, “Many dream of living and working abroad and don’t want the burden of a home. Others would rather have extra spending power rather than sacrifice for a deposit. What is very clear from this survey is that a significant number of tenants are in rented accommodation not because they can’t afford to buy, but because they are choosing to rent.”