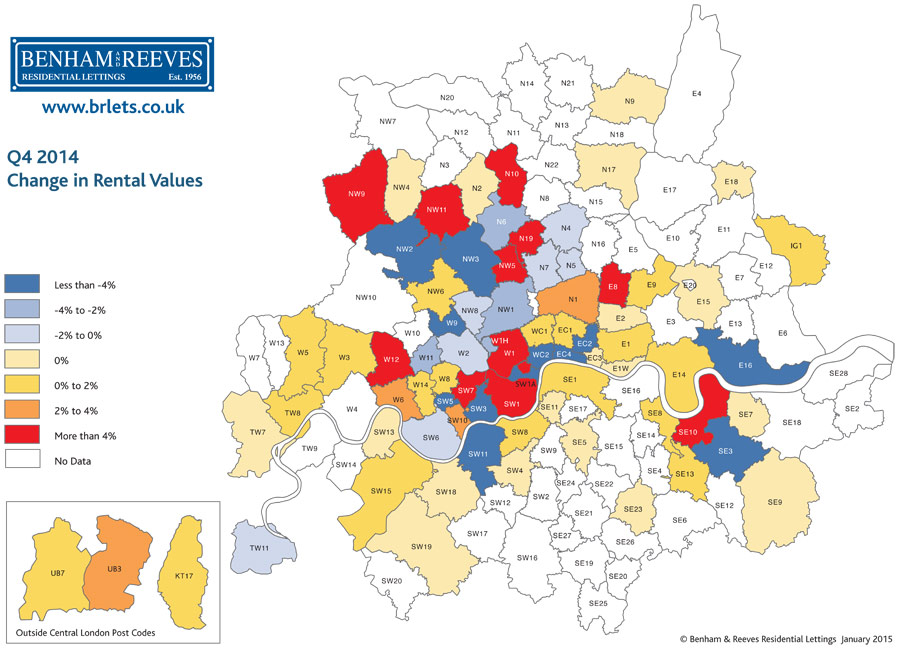 After months of decline, rents in prime central London have begun to climb upwards again. Rents in many of London’s most prestigious neighbourhoods including Knightsbridge, Belgravia and Mayfair have seen rental values increase by four per cent or more over the final quarter of 2014 . Inner suburbs, meanwhile, saw more modest rental increases but indicators suggest the market is still very strong.

Unrest in th e Middle East coupled with increasing demand from corporate clients ensured a return to form for prime central London. Agents also report a number of tenants choosing to rent until the sales market stabilises after the general election. Notably, Chelsea and South Kensington bucked the trend and saw significant falls in rents in contrast to neighbouring areas. Chelsea and South Kensington rely much more heavily on the domestic market so have not seen the same uplift.

Most of the inner suburbs saw rents s tabilise or enjoy modest growth although the rental market in north London areas such as Hampstead and Highgate continued to cool. Fewer new homes are being built in the area so tenants are drawn to newer and often less expensive developments in east Lond on. The two boroughs that reportedly saw the biggest capital growth in London last year – Hackney and Greenwich – also saw large rent increases as new developments came to the market.

Marc von Grundherr, Lettings Director at Benham & Reeves Estate Agents adds, ” Prime Central London is seen as a blue chip investment for a reason . Capital growth may have slowed but its popularity remains undiminished, especially in the eyes of tenants. Bearish headlines at the end of last year were cause for concern , but landlords who have kept their nerve in the latter half of 2015 are finally seeing their just rewards.