The suggested replacement of the far from appealing flyover with a tunnel is one of the indicators that Hammersmith in West London is on the rise.

A commitment to make the riverfront an accessible part of the neighbourhood once more has triggered a spate of building projects that will appeal to many prospective tenants who are currently priced out of surrounding districts. The extra room created by this ‘fly-under’ will enable new offices, parking and recreational spaces to be built and will definitely make the neighbourhood more conducive to family living. Access to the River Thames will play a key part in turning Hammersmith into an area that compares favourably with neighbouring Fulham and new property developments are duly springing up on their mutual borders. The next phase at Fulham Reach plus forthcoming Sovereign Court and Queens Wharf are all prime examples of the direction that Hammersmith is headed.

Property developers have mainly taken advantage of disused commercial land. On the map, Hammersmith is a strip of riverside that arcs westward from Hammersmith Bridge to Chiswick. The middle section, also known as The Mall, is part of a conservation area which means developers have had to concentrate their efforts on each side as well as further inland.

Fulham Reach, a St George development that overlooks the river, has the kind of features that are bound to attract interest from busy corporate high-flyers. Spa facilities, a cinema screening room and a wine cellar are all exclusively available to residents. The celebrated River Café, the restaurant that nurtured the young Jamie Oliver, is situated in a neighbouring wharf. Prices range from £800,000 for a one bedroom flat to £9 million for a super-luxe penthouse with 5,266 sq ft of space. On the rental side, two bedroom apartments from £750 per week and three bedroom apartments from £1,200 per week are excellent investments. Smaller units will be available soon with studios from £475 per week and one bedroom apartments from £525 per week.

Our lettings office situated on-site at Fulham Reach is able to advise landlords on current rentals so if you have a property in the area, please do contact our Hammersmith team on 020 8600 0960 or email us.

Sovereign Court is a smaller St George scheme, slightly set back from the shoreline and being built on the former site of a commercial car park. 418 luxury homes will share space with offices, shops and restaurants, just over 100 yards from Hammersmith Tube station. Two bedroom apartments will cost just under one million pounds. Nearby, the eight storey Queens Wharf completes a hat-trick of new builds that are positioned near the main hub of the area. Of the three, it is the nearest to the Grade II listed Hammersmith suspension bridge and therefore, arguably has the best views. When completed, it will incorporate the famous Riverside Studios so helping maintain Hammersmith’s reputation of being West London’s theatreland, a tag that the area earned because of the cluster of venues that include the Riverside, the Apollo and the Lyric. With the first phase due completion in 2017, prices start at £715,000 for a one bedroom apartment and £1 million and £1.3 million for two and three bedroom apartments respectively.

The properties that line the section of the path known as The Mall are nearly all listed as historically significant and houses can fetch just under £5 million pounds. Because the busy A4 cuts this area off from the rest of Hammersmith, these streets have formed quite an exclusive enclave and homes around here are highly prized. The views across the river to Barnes are particularly appealing as the opposing bank is made up largely of a wetland conservation area. The imposing stucco-fronted houses of St Peter’s Square constitute one of the area’s most desirable addresses. Dating from late-Georgian times, they are complemented by an exquisite neo-classical church and historic public gardens. A limited amount of development has resulted in the creation of St Peter’s Place, a clutch of new five bedroom period-style townhouses, each with a family super-room connected to a courtyard, a private cinema and underground parking. These 2,750 sq ft beauties have asking prices of £3 million. Most rental investors will not be looking to spend this kind of money on a rental property, but it does demonstrate the direction of wealth pouring into this zone 2 location and the future potential developers are clearly seeing here for further growth.

The Thames path that runs along the nearby southern border of Hammersmith is one of the most convivial strips in London. Riverside pubs are dotted all along the shore, from the Old Ship to the historic Dove – a waterfront bar so cosy, it’s rumoured that Ernest Hemingway was just about able to squeeze his ego through the front door.

Undeterred by the limited riverside opportunities, developers have looked further inland to leafy areas like Ravenscourt Park and Brackenbury Village. Linden Homes have converted the former nurses’ accommodation building of the old Royal Masonic Hospital into Ashlar Court – sixty-eight luxury homes with underground parking. Keeping the Art Deco facade, they have added four accommodation levels, topped off by rooftop gardens. Two bedroom apartments are priced at £750,000. Bentley Place is a new development of one, two and three bedroom homes that benefits from being in Brackenbury Village. This is an area made fashionable by its popularity with media professionals connected to the former BBC HQ in neighbouring Shepherds Bush. 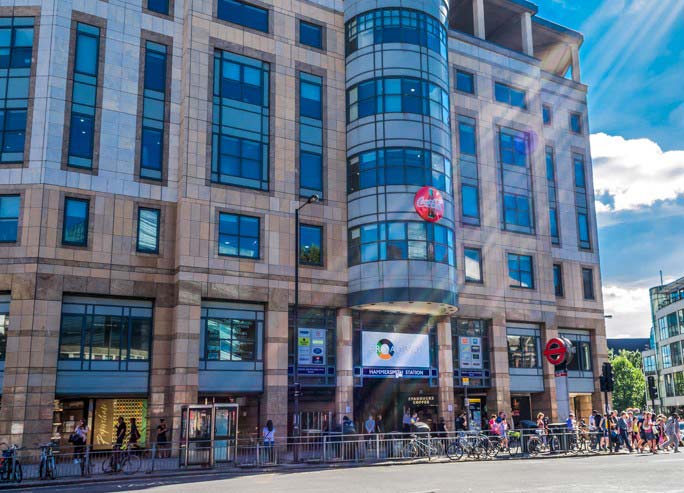 Hammersmith has always attracted businesses owing to its strategic West London location, sited half way between the West End and Heathrow Airport. This has led to the construction of some imposing, as well as imaginative, office spaces such as the ship-like Ark building. Global companies including Coca Cola, Disney and L’Oreal have all set up their respective HQ’s in the area around Hammersmith Underground Station, giving their staff the advantage of being out of the office and doing business along the M4 tech corridor in the shortest possible time. Overall, Hammersmith benefits from excellent transport links. The Piccadilly Line runs straight into the heart of the West End and also connects all Heathrow Airport terminals. The District Line links Hammersmith to Kensington, Victoria (with its Gatwick Express shuttle) and the City. The Hammersmith and City Line has its own separate station and is useful for skirting round the centre of London, while still connecting Paddington, St Pancras and Liverpool Street rail hubs. This provides access to Heathrow, Luton and Stansted Airport shuttle services, respectively.

Average rental yields in Hammersmith are a fairly modest 3.42%, but the area’s Zone 2 location on the London Underground map ensures that property values, which have increased by 30 % in the past five years, will remain healthy and yet compared with most of its neighbours, still represent good value.