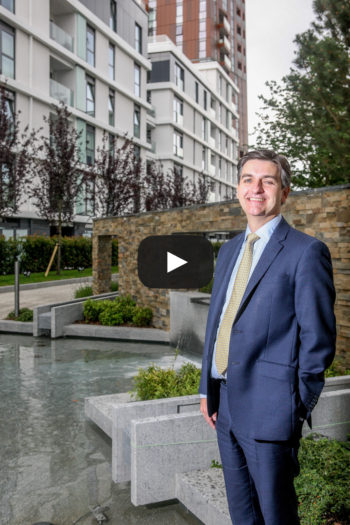 Placemaking – a new approach to urban renewal – is the practice of forming whole new communities while avoiding shallow regeneration clichés. Instead of throwing up yet another bunch of identikit gyms and cocktail bars, developers like Barratt London are looking ahead to when corporate professionals begin to start families. In five or ten years time, they will be in the market, not only for bigger homes, but also for schools, art galleries, music venues and other creative recreational spaces. The aim is to ensure that such people settle and raise their families in and around Nine Elms Point, thereby triggering further long- term investment. In this respect, an 80,000 sq. ft. flagship Sainsbury’s supermarket on the ground floor constitutes a pretty solid commitment, as does the opening of our on-site branch: a valuable resource for both landlords and tenants looking to lease or buy in the area.

This is not to say that Nine Elms Point lacks the five star amenities that corporate tenants require. The fitness suite and business facilities are undoubtedly top drawer and a 24 hour concierge service keeps things running smoothly. However, the biggest advantage of living in Nine Elms Point, is its direct proximity to a brand new Underground station. This, together with commanding views of the Thames and access to a superb linear park, yields in excess of 4% are what makes Nine Elms Point the jewel in the scheme’s investment crown.

A key element to any new neighbourhood’s success has to be its connectivity. To this end, both public and private sectors are forging ahead with ambitious plans to redraw the London Tube map. The Northern Line is set to extend from Kennington to Battersea Park and will as a result add two brand new stations to its network. They will be at Nine Elms Point and Battersea Power Station, which is where farsighted developers have created space for major retail and office hubs, ensuring that these destinations thrive and exert influence on the surrounding neighbourhood.

There have been plenty of eye-catching headlines concerning Nine Elms in the past few months and all have been positive. The relocation of the US Embassy, the arrival of the new Apple HQ and the successful resurrection of the iconic Battersea Power Station have all boosted the area’s profile. This means that as drilling for the Tube extension progresses, expectations are as high as the ultra-luxe sky pool in nearby Embassy Gardens.

Regeneration can throw up a number of challenges. Build too fast and you create half-empty luxury ghettoes: sterile and disconnected, whereas hesitation may lead to a cooling of interest as the property press looks for the next big thing. In this regard, Nine Elms Point and its sister developments have struck an excellent balance. Developers like Barratt London have shown the necessary boldness in forging ahead with the task of making London a future proof business magnet that continues to impress and improve.

Three Bedroom from £750 plus per week