When the world-wide media uses images of red double decker buses gliding sedately past Big Ben, their aim is to instantly transport us to London. No mockney accents or Elgar marches are required – the iconic riverside scene does the job on its own thank you very much.
But there’s more to London’s maritime scenery than the Houses of Parliament because from the vast stately pile of Hampton Court in the west, to the futuristic flood defences of the Thames barrier in the east, London adorns the River Thames with all manner of man-made beauty while also leaving a large chunk of it to Mother Nature. 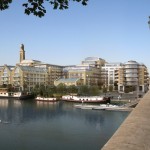 The bridges that traverse the Thames set the tone of the surroundings. Kew Bridge has a rustic charm that complements the Georgian splendour of nearby Richmond and the urban greenery of Kew Gardens perfectly. Rowing teams and pleasure boats glide under the Victorian suspension structure that spans the river at Hammersmith. Riverside pubs and boat clubs are much in evidence here and the abundance of water fowl make this stretch of the Thames ideal for bird watching.

On Her Majesty’s Secret Service 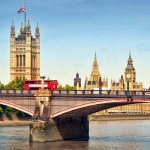 Albert Bridge is named after the love of Queen Victoria’s life and as a result it is bathed in fairy lights at night which make it the backdrop to one of the most romantic walks in the capital as the glowing lamps of Chelsea Embankment cast their glow over some of the most beautiful mansion blocks that you’ll ever see. Across the water, the structure that some old hippies still think was built by Pink Floyd, is undergoing a long overdue renaissance. Battersea Power Station is a unique building that is set to house luxury apartments that are sure to be some of the most sought-after in Europe. From beneath its towering chimneys, residents will be able to see the attractively sinister outline of MI5 headquarters, where surely at this very moment, security boffins are devising all manner of gadgetry for the world’s most famous spy.

The Old and The New

Should you be part of that sad minority that refuses to believe that 007 and Dame Judi are single-handedly responsible for world peace, then you’ll be relieved to know that this southern shore of the waterway now suddenly transforms itself into an arts hub that has few rivals. Facing Big Ben across Westminster Bridge is the Southbank Centre which features the new symbol of a confident multicultural metropolis. The London Eye dominates the skyline around here and is a welcome focus for one of the most vibrant areas of the city. From here on in, the heavyweight landmarks come thick and fast as St Paul’s Cathedral, Tate Modern, Tower Bridge and the Tower itself stake their claims to be London’s most iconic feature, although The magnificent Shard skyscraper seems to have put in a late bid.

The Greater London Authority have cunningly disguised their offices as a giant armadillo (wonder if 007 has twigged yet), providing light relief before the double whammy of Docklands and the Millenium Dome. As the Thames makes an extravagant loop to the south and east (almost cutting itself off in the process), a mini-Manhattan of glass and steel comes into view. Clustered around Canary Wharf are skyscrapers, monorail systems and luxury high-rises that dazzle at night and inspire awe during the day. Across the way and reachable by cable car is the massive multimedia venue that is the Millennium Dome, a final salute, one might say to the future of one of the most distinctive and diverse stretches of water on earth.