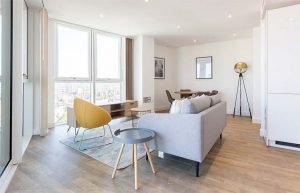 The final phase of new rental homes has started to complete in Nine Elms Point a highly popular scheme in the Nine Elms regeneration area. Despite these new homes completing during the autumn season,demand has been the strongest we have ever seen for a new property development! The first 25 homes that completed were let by our on-site branch within 10 days. For 6 owners, they were able to choose from 2 offers and on one property, there were 3 people fighting over it resulting in a10% increase above the asking rental for a 3 year term without any break.

This is a clear sign of the public interest in the Nine Elms area which is now firmly plotted as a Zone 1 rental hotspot.

The rents achieved have been good too with one bed homes on the lower floors achieving £500 per week and as much as £575 on the higher floors while two beds on lower floors have achieved as much as £675 per week and those on higher floors achieving over £800 per week due to the amazing views. Nine Elms Point’s combination of excellent transport links – which will be even better next year when the Northern line extension station opens directly opposite the development – five-star amenities and fabulous views of London’s riverside skyline is proving to be irresistible! It’s a trend that is driven by demand from both wealthy overseas students from top Universities such as the London School of Economics and Kings College London as well as professionals working in various tech sectors.

With many foreign currencies performing strongly against the Pound, this is the right time for investors to take advantage of some good deals which they simply wouldn’t get in other zone 1 locations like Knightsbridge. The profitability of Nine Elms Point extends even to its penthouse suites which overlook the River Thames opposite Chelsea.There is a strong market from both international investors and London buyers for such high-end property that can be purchased at relatively competitive prices and still provide those all-important skyline views and a short commute into the financial district.

Such is our confidence in Nine Elms Point and the rental demand here, we are offering investors a rental guarantee* yield for upto 24 months.Investors can take advantage of a 5% gross yield paid from the day of completion so no worries about taking time to find a tenant or for rental payments to start. This is a new approach reinforcing confidence which appeals to both seasoned as well as entry-level investors.

A key element to the success of any new development is connectivity and this is where Nine Elms Point scores very highly as it is only a short walk to Vauxhall underground and overground stations but soon will be at the entrance of the new Northern Line extension which links the main City and West End networks to the whole Nine Elms area as well as to the Battersea Power Station mega development. Residents will be able to reach Canary Wharf in under thirty minutes and the university quarter in Holborn in under twenty minutes. A flagship Sainsbury’s store is also on-site and adds further convenience.

The moving in of high profile neighbours like Apple Head Quarters and the American Embassy points to a future of prosperity and permanence for the whole SW8 area that Nine Elms Point is central to. Buying in at the early stages of this regeneration wave is therefore of utmost importance. With the Help-To-Buy scheme currently injecting cash into the London house market, there are currently a lot more people buying compared to the previous six months. Our advice to investors is to act now as the pound is fairly weak and if you choose a product that you feel confident in, you will definitely see results. We are confident that Nine Elms Point is one of those products.