Easy Living in Highgate and More

With its Georgian and Victorian heritage, thriving social life and leafy expanses, Highgate is most definitely on our London property hotspot hit list and among some of the most popular areas to live in London. Follow our guide to explore all that is Highgate and don’t forget to give us a call – we’d love to show you the best rental properties ‘up North’ too. 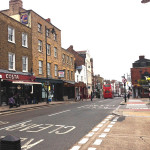 It’s hard to imagine today, but lovely, leafy Highgate was once a village that sat outside London’s borders and served as a final stopping point for travelers on the road north. Then, as now, one of its chief attributes was its position at the top of a hill – 446 feet above sea level to be precise – and its fabulous views across London. In fact, we’re still a little awestruck every time we stop and take in the panoramic scene in front of us at Parliament Fields Hill.

Georgian and Victorian architecture abound here but its biggest landmark is Highgate Cemetery , where some of London’s radical and illustrious personalities are buried. Possibly the most famous is German philosopher Karl Marx who died a stateless person and was buried on 17 March 1883. It wasn’t until 1954 that the Communist Party of Great Britain commissioned the iconic portrait bust of him, which now marks his grave.

Nearby is the grave of Middlemarch author Mary Ann Evans, or George Eliot as she is better known – she adopted the male pen name to ensure her work would be taken seriously. A controversial figure, she had an open marriage with philosopher George Lewes, and later married John Cross, a man 20 years her junior. This and her denial of Christianity led to her burial at Highgate Cemetery in an area reserved for religious dissenters or agnostics.

And more recently, in 2010, punk maestro Malcolm McLaren was buried here, fittingly to the strains of Sid Vicious’ version of My Way. Highgate Cemetery’s Gothic architecture has seen it regularly used as a film location, from the 70s Hammer Horror series, to Shaun of the Dead and Dorian Gray. It sounds morbid, but the cemetery is a beautiful place to explore.

Nearby is Waterlow Park, given to the public by philanthropist Sir Sydney Waterlow as ‘a garden for the gardenless’. Pack a picnic and enjoy a late Indian summer lunch lounging on the slopes of Highgate bowl, on the east side of the park – bet you won’t feel like you’re just a stone’s throw from the City.

Now we love our architecture and will gladly point you towards some fabulous properties currently in our portfolio such as this 3 bedroom semi-detached house near the notable Holly Lodge Estate, but we doff our cap at Highpoint I and II, which were designed by Russian architect Berthold Lubetkin and Danish engineer Ove Arup. Built in the 1930s, Corbusier described it as, “an achievement of the first rank”. Head up to North Hill and marvel at these Grade I buildings.

As Highgate is renowned for its pubs, it would seem only rude not to partake in a refreshing beverage at one of its wonderful establishments. Top of our list is The Flask (77 Highgate West Hill, tel: 020 8348 7346), which has been serving since 1663 and is said to have been frequented by highwayman Dick Turpin (who hid in the stables from officers of the law) and artist William Hogarth.

If you prefer to keep things teetotal, instead head for High Tea of Highgate (50 Highgate High Street, tel: 020 08348 3162) for a vintage teashop experience complete with blowout, mouthwatering cakes.

When it comes to evening entertainment, check out what’s on at Jacksons Lane, a multi-arts venue in a red-bricked Gothic church conversion, but first refuel at another of those fabulous pubs, The Bull and Last (168 Highgate Road, tel: 020 7267 3641). Don’t be alarmed by the mounted animal trophies, the food’s good here – try the Charcuterie board which is a carnivore’s delight with duck prosciutto, ham hock terrine, chicken liver parfait, rabbit rillettes, pig’s head, pickles and toast, or splurge on Cote de Boeuf for two. À bientôt, Highgate!

Like the sound of Highgate living? Contact our Highgate office on 020 3468 2009 and we’ll be delighted to show you our available properties in the area.