Living the high life in Highgate

Highgate has a distinct village feel combined with leafy surroundings making it an ever-popular area for those wanting to rent in London. Add in the fact that there are an abundance of restaurants, shops, cafes and top performing schools and it’s not hard to see why people renting property tend to stay for the long term, especially families.

Interestingly, the area hasn’t always been classed as within London and was once a village outside the Capital, serving as a final stopping point for travellers heading on the long road north. It was also the setting for the first ever cable car in Europe, operating between 1894 and 1909. Fortunately, today’s modern transport lets commuters get around a little easier.

Despite only being 4.5 miles from Charing Cross, a walk around Highgate is more likely to evoke feelings of countryside walks, miles away from London. Most of the buildings here are from the Georgian and Victorian eras, where you will find large conversions that have been transformed into apartments, while keeping their period charm. We have a four bedroom garden apartment on Jackson’s Lane, which is a good example. Not all period buildings have been converted though, and Holly Village has a three bedroom detached house showcasing the type of properties in the area that have become so popular with young families.

The area isn’t averse to the odd new build and you’ll find a selection of new developments, although not quite the same quantity you will be used to seeing in other areas of London. This luxury two bedroom apartment in Caenwood Court mixes modern designs with the green open spaces that Highgate is well-known for.

The average price for a one bedroom apartment is between £300-350 per week, with two bedrooms commanding £375-550. A three bedroom property is typically priced around £600-750. Family houses with three bedrooms-plus start around £800 per week, rising to £1,500 per week.

There are good transport links offering residents easy access into Central London and the City. Highgate Tube station, on the Northern Line, is in Zone 3 and offers services to popular central London areas such as Leicester Square and Charing Cross, with travel times around 20 minutes. Bank and Monument, in the City, can be reached in less than 30 minutes. Major stations such as King’s Cross, Waterloo and London Bridge are all directly accessible from Highgate Tube station, meaning people have plenty of choice regarding areas to work in London. A good local bus network provides services to nearby areas such as Muswell Hill, Holloway, Kentish Town and Islington.

The High Street in Highgate is small but just the right size to offer a good selection of shops, restaurants and cafes, while retaining its village feel. There is a long-standing pub culture, so there are plenty of cosy gastro pubs to enjoy a drink and some traditional pub cuisine. The Duke’s Head offers craft beers and ciders from independent brewers, while the Red Lion & Sun include some impressive dishes on their menu, including the Big Apple Hotdog.

There’s a good mix of high street and independent restaurants such as chain favourites Strada and Cote de Brasserie, while the family-run Fabrizio offers family-style Italian cuisine. If you have a sweet tooth, you may want to stop at the Highgate Pantry, where there are more than a few cakes to enjoy. They also specialise in making handmade food for parties; perfect if you’ve got a celebration coming up.

There’s a selection of shops in the area which include boutique children’s clothes shop, Notsobig, beloved by families with young children. Artway Emporium on Archway Road offers hand-crafted items, jewellery and artworks, while Highgate Bookshop is a favourite with bookworms, featured as a must-visit bookshop by authors in a recent Guardian article.

Top of the class

Some of the best independent schools in London can be found in Highgate and surrounding areas. Highgate School is a co-educational day school for pupils aged 3-18 and has an exceptional rating. Channing School is an independent day school for girls and continues to be in high demand. Henrietta Barnett Grammar School takes its position in a beautiful Grade II listed building and is one of the top performing girls’ schools in the country.

With thoughts moving to the summer holidays, Highgate has a number of events to keep the children entertained. Highgate Fair in the Square takes place in Pond Square, where thousands of people will visit to enjoy live music, colourful stalls and children’s activities, which include fair rides, face painting and play tents. Summer camps are popular too; Drama and Dance with Perform, taking place at Highgate Untied Reform Church, is one for the mini entertainers of the future. 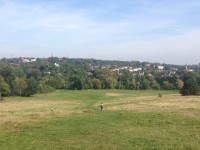 Highgate takes its position as one of the highest points in London and offers impressive views of the skyline from many different vantage points.

Hampstead Heath, with over 790 acres of green space, has plenty of scenic trails to explore and is just one of the many open spaces adjacent to Highgate. At the Highgate end of the Heath, you will find Kenwood Park, which sits around a beautiful white mansion, Kenwood House. With its landscaped lawns sweeping down to pretty lakes, open-air concerts are often performed during the summer months. Highgate Wood offers 70 acres of rough terrain, giving a real rural feel to the area, while the Grade II listed Gothic Victorian cemetery is the resting ground for Karl Marx, George Elliot and Christina Rossetti, to name a few.

The Holly Lodge Estate was built in the 1920s, sitting opposite the cemetery and is one of the only two housing estates in the UK originally built for single women. Residents are served well by the estate’s community group and with its ornamental gardens and hillside setting, the area continues to attract families looking for a home in Highgate.

Highgate also has its own conservation group, The Highgate Society, who are in place to protect its period charm and character.

Looking to move to Highgate?

If you want to experience village living, where you can enjoy pleasant walks around green open spaces, view fantastic architecture and dine in the many restaurants in the area, while only being a few miles from the centre of London, take a look at our Highgate listings page. Alternatively, get in touch with our Highgate office or drop us an email at info@benhams.com .