Home NewsThe Carnival Code: How To Be A Notting Hillbilly

The Carnival Code: How To Be A Notting Hillbilly

A post-war influx of immigrants from the sunny Caribbean brought a welcome splash of colour to battle-weary London and the suburb of Notting Hill, in particular, was soon reverberating to sounds from Jamaica, Trinidad and Barbados. What started as a nostalgic steel band jam session now draws over a million people over the August bank holiday.

The grid of streets that stretch from Westbourne Park, down Chepstow Road and up Ladbroke Grove was the route that was randomly chosen for an impromptu street procession in the mid-sixties. The area was home to a concentration of West Indian pubs, cafés and social clubs which all became cultural launching points for a subsequent annual celebration of music, dancing and food.

Well that’s the history, but you can get all that on Wiki so as we have been operating in West London since the nineties, here’s some insider knowledge.

When it comes to getting back to your roots, nothing beats music and food. The sixties saw many West Indian restaurants and record shops spring up in the area. Today, the cultural irony of the Notting Hill Carnival is that due to regeneration, the largest Caribbean street festival in Europe dances past some of London’s most beautifully restored examples of English period architecture. 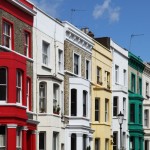 Well spotted. In the colonies it was customary for slave owners to host a bigblowout on the eve of the period of fasting known as “Lent”. This obviously appealed to the slaves for whom fasting was a lifelong reality and they took to it with gusto. They were also allowed to play their music which is fortunate otherwise we’d all be morris dancing down the Portobello Road.

How did steel drums come about?

Music made on makeshift instruments has always been an Afro-Caribbean speciality. Empty oil drums were hammered into tuned percussion instruments of various sizes. These “Steel Drums” generate the signature sound of Calypso, a music genre that kick-started reggae and everything that came after it.

Is the calypso sound still dominant?

The Trinidadian sound has been updated into Soca and still reigns supreme where teams of hip-swivelling dancers follow their chosen floats. The tougher Jamaican rhythms of reggae dominate the streets via static sound systems dotted around Goldbourne Road, Elgin Cresent and Pembroke Villas.

Is there more than one type of reggae?

Seeing as the carnival is now almost as Jamaican as an Olympic sprint final, here are a few clues about the reggae family tree:

Does the term “Jerk Chicken” refer to the chef or the customer?

Joking aside, the origin of the term is not clear but probably refers to a cooking method that involves the rapid turning of the barbecued meat over the fire. From Powis Square to All Saints Road, you’ll see examples of this practice which is as much about attracting customers as it about tending to the chicken. Other delicacies are curry goat which actually is a lamb dish and ackee which looks and tastes like scrambled egg, yet is actually a fruit.

Who goes to carnival?

Everybody is afforded a massive Caribbean welcome! From the company director living round the corner in Coleville Terrace, to Aussie backpackers crashing with friends on the Harrow Road. The visitor demographic is all-inclusive and global.

Sunday v Monday: When is the best day?

Sunday is kids’ day and is ideal for following the brightly coloured floats around in relative peace. Monday is where the sound systems come into their own, attracting the serious music fans. What is apparent on both days, however, is the incredible vibrancy and sheer multicultural energy that exists right on the western doorstep of London’s Zone 1. Notting Hill has achieved that rare combination of regeneration and inclusiveness that makes it such a great place to rent a home as well as a great carnival venue.

So here’s to 50 more years of Carnival craziness!