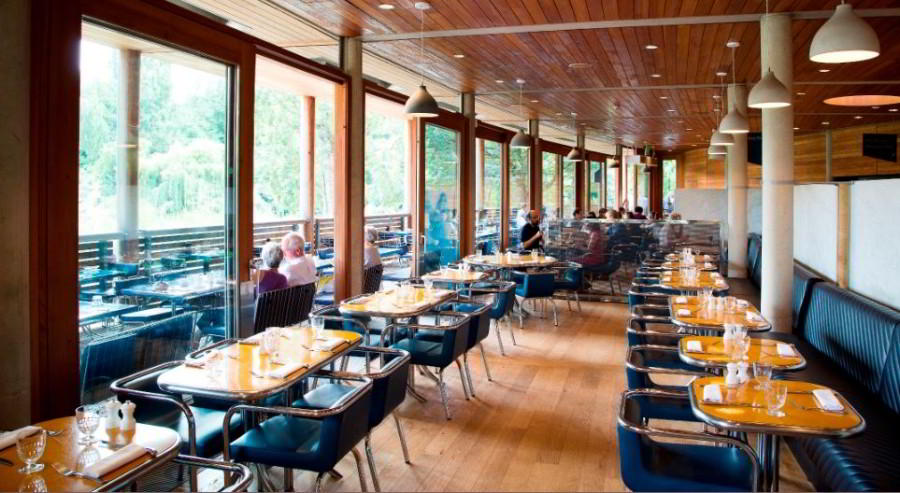 During the summer months, London sparkles and shimmers as if responding to the extra hours of available daylight with fresh breezes from the Thames making outside dining a particular pleasure. Of course eating al fresco can mean many things to many people but we’ll assume that most of us are looking for a bit more than a pavement pie or a beer garden burger. Let us then divide the experience up into three categories: Parks, waterways and rooftops.

Enjoy the convivial feeling of a picnic without the tantrums, clean ups and sunburn!

Inn The Park is housed in an ingeniously designed building that blends right into the idyllic surroundings of London’s oldest royal park. It’s curved and spacious verandas allow guests to enjoy the sights and sounds of the many exotic water fowl that make their homes here. Seasonal British cooking and an all-day BBQ are specialities and there’s plenty of space in between tables for those requiring a bit of intimacy.

This lively lakeside eatery in Hyde Park offers you a bit more bustle for your buck. Watching ducks and swans squabble on the shore is fun but witnessing the haphazard boating skills of human beings in the Serpentine is even better. Deliciously fresh pizzas go down a treat in this family friendly establishment. Fish and chips, pulled pork sandwiches and massive salads are all available at reasonable prices. The balcony overlooking the lake makes it easy for parents to keep an eye on the kids playing below and there’s plenty of ice creams on offer to tempt them back up.

A cool flagstone patio opens up onto a beautiful South facing garden making the Brew House an ideal venue for relaxed breakfasts and sumptuous high teas. Originally part of the service wing attached to Kenwood House, it now operates as a separate concern. The grounds of this immaculately preserved stately home back onto the vast open spaces of Hampstead Heath which tends to make a post-lunch stroll almost mandatory. The menu is short but the cooking is expert with lamb tagine a local favourite.

Down By The Riverside:

There’s something about dining on the waterfront that appeals to even the most blasé Londoner. Maybe it’s the nautical angle (Britain being an Island) or fact that summer afternoons seem to go on forever. What’s undeniable is the fact that there’s nothing like a cool estuary breeze wafting up the Thames for sharpening appetites and taste buds.

This Anglo-Italian labour of love has become a West London institution without losing its unpretentious focus on garden fresh produce and elegant service. Sitting in the riverside garden, you can breathe in the aroma of the very same herbs that will be used to cook your red mullet. This is no accident as the staff at the River Cafe want you to know that they take flavour very seriously. Artisan olive oils, aged balsamic vinegar and a wood burning stove that looks like an altar to slow cooking, all contribute to the vision. The waterside location only serves to sharpen an appetite already made keen by the mouth-watering selection of starters.

The Grand Union Canal is not strictly a river (although it flows into the Thames). However, it has a unique charm that makes following the canal towpaths through North London particularly enjoyable. The area near Maida Vale known as Little Venice is the most attractive segment and, as its name suggests, has a definite Mediterranean feel to it. The Summerhouse is a friendly bistro that combines seaside decor with fresh seafood and friendly service. Watching the decorated barges float by while enjoying a glass of strawberry scented rosé is the ideal way to pass the time during the warm afternoons.

Once part of the Terence Conran restaurant empire, Pont de la Tour is still one of the best night time vantage points from which to see a gloriously lit up London. On balmy summer nights, all the capital’s iconic structures can be seen from the outside terrace seating. Tower Bridge, St Paul’s, The Gherkin and a host of gleaming new structures make table lights almost superfluous. Fine French classics such as  foie gras ballotine, lobster thermidor, veal kidney flambé à la moutarde are cooked to perfection and served with impeccable professionalism.

Up On The Roof:

The secret of elevated dining is not to go too far upwards. You need a good view of the City but you don’t want to lose detail. After twenty or so floors things start to look a bit sci-fi which is ok if you’re into that sort of thing but it’s tends to remove the people-watching aspect from the experience.

Still going strong and still delighting Sloan-rangers, tourists and pre-clubbers alike, Babylon is designed to delight and astound in equal measure. When you emerge seven floors up, you are greeted by the surreal sight of live flamingos bobbing their heads in time to live music and a lavish champagne bar – Babylon indeed! The roof gardens themselves are not just potted afterthoughts, but horticultural marvels in their own right. From May to September, there is a Summer BBQ Club with free Pimm’s for parties of ten or more. Don’t miss their excellent sea bass and seafood risotto on the menu.

This Shoreditch gastropub extraordinaire has hip clientele, an ever-changing menu and a rooftop space that serves as a venue for all manner of trendiness. They don’t let the seasonal weather changes deter them either. During the winter months Queen of Hoxton hosted a massive wigwam on its roof ensuring all al fresco diners were kept warm. This summer features a BBQ pit, themed film events and silent discos. The Square Mile backdrop is both stunning and inspiring. Grab a frozen cocktail and listen to the latest chilled underground mixes as you choose from the eclectic menu. Salt & pepper calamari & aioli, Sticky glazed BBQ ribs and harissa chicken skewers are big favourites.

With masses of confidence flooding into the City, all roads lead to Coq d’Argent rooftop. The restaurant owners have learned some tricks from the arguably trendier spots in neighbouring Shoreditch and have constructed a theme around this most sought-after vantage point. Inspired by the French Riviera, the terrace now features nautical canopies, ships wheels and art deco posters. Champagne cocktails, of which there are an almost infinite variety, are almost mandatory. The menu is high-end French and the views incorporates both City skyscrapers, St Paul’s and the London Eye: a pleasing synthesis of traditional and modern.

And Finally – For Those About To Shop…

If you really insist on a slice of cafe culture that doesn’t take you too far away from the retail action, look no further than St Christopher’s Place. This pedestrianised patch of real estate is tucked behind the hustle and bustle of Oxford Street, yet it’s a model of civilised tranquility. It also boasts one of the largest and best concentrations of pavement cafés in London, pulling off the trick of being eclectic yet accessible without coming across like an airport food court. French, Italian and Pan-Asian outlets all cook to consistently high standards.