Get ready for the Virgin Money London Marathon 2015

On April 26th, 35,000 people will push their bodies to the limit while taking on the admirable feat of running the 26.2-mile (42.2km), Virgin Money London Marathon. Whether you’re participating, showing your support from the side-lines or watching on TV in the comfort of your own home, read on and discover more about the key areas the marathon covers. You may even find a new rental property that catches your eye along the way.

Participants will test their heart, desire and willpower in order to complete this gruelling race, which starts at 10.00am in Greenwich, south-east London. Over the past few years, the area has become increasingly popular with young professionals, thanks to considerable regeneration and excellent transport links connecting the south and east of London to the City and Canary Wharf. On the back of this, new property developments like Greenwich Square and New Capital Quay have been added to the skyline where more affordable rental prices of £300 per week can be found. Situated in the southern part of the Royal Borough of Greenwich, Kidbrooke Village adds to London’s dynamic development scene with modern apartments and scenic communal gardens. Rental prices start from £290 per week.

As the participants exit Greenwich and head east, spectators might be interested in visiting local attractions such as the scenic spaces of Greenwich Park, which has panoramic views across London, while the Cutty Sark is a popular 19th century museum ship, famous for being the last surviving tea clipper.

Work up a sweat

Around 13 miles (20km) into the race, runners will be wiping the sweat from their brows as they reach Wapping. The East London area has a strong maritime tradition through its popular riverside public houses and has seen mass regeneration via converted warehouses and new property developments such as 21 Wapping Lane and London Dock, where we will be opening up our thirteenth London lettings branch later this spring.

Running along the skyscrapers

Mile 18 (30km) will see weary legs head towards Canary Wharf, the thriving business district that is now a sought-after residential hub, thanks to the excellent shopping amenities, abundance of restaurants and open spaces. There are many inspiring towers that stand proud over the waterside, adding dramatic effect to the London skyline. The Landmark is a stunning mixed-used development that benefits from stylish apartments, 24-hour concierge and a host of on-site amenities. Rentals start from £375 per week. Pan Peninsula comprises of individually designed apartments along with enviable amenities such as an on-site health and fitness spa, waterside restaurant, 50th floor cocktail lounge and a private cinema. Rentals start from £335 per week and our Canary Wharf lettings team can help if you are inspired to live in the area.

20 miles (32km) into the race and thoughts of the finish line start to creep into the minds of the runners; this is when endurance is most important and the will to finish really kicks in. By this point, the participants will find themselves in Limehouse in the London Borough of Tower Hamlets, East London. It’s another area popular with people who want to live within close access to Canary Wharf and The City, offering apartments with panoramic views over the River Thames and a selection of popular riverside pubs, as well as scenic cycle and jogging routes. If you’re interested in renting in Limehouse, take a look at a couple of our one bedroom rental apartments starting from £350 per week.

Runners will then pass through the heart of the City, which is around the 22-mile mark, as they head south. Spectators who want to be involved, showing support at this stage of the race, can use Blackfriars Tube station. The City is a convenient area to live due to its central location, excellent travel links, and varied mix of attractions from prestigious architecture like St Paul’s Cathedral to the hip streets of Shoreditch. This smart one bedroom apartment in the St Dunstan’s Court development offers great modern living, while this two bedroom apartment in Temple keeps you close to a range of transport services.

Westminster in central London is the final stretch of the race, where you can already hear the crowds start to roar you home to the finish line. This is the moment where all the hard work pays off and participants can see those shiny medals in sight. Westminster is rich in architecture, and has famous landmarks including the Houses of Parliament and Westminster Abbey. Renting a property in Westminster means you will have a very royal neighbour; Buckingham Palace, the London residence of the Queen, is just moments away, although, you may want to call ahead before stopping by for a cup of tea! There are some modern property developments in the area, adding to its prestige, such as The Artilleries which has a selection of modernised one and two bedroom apartments hiding behind a handsome period façade. Rental prices from £400 per week. The Courthouse is one of the area’s latest and most upscale developments and occupies the former site of the City of Westminster Magistrates’ Court and features apartments with direct views over The Houses of Parliament. Rental prices here start from £400 per week and are well worth taking a look at. 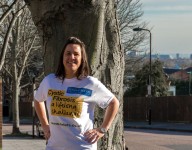 Benham & Reeves Estate Agents will be represented at this year’s Virgin Money London Marathon by one of its own property managers, Catherine Close. She will be taking on the task of running in support of the Cystic Fibrosis Trust, a charity that receives no Government funding. If you would like to show your support for Catherine, you can make a donation here; all donations go direct to the CF Trust.

Good luck to Catherine and everyone taking part in the 2015 Virgin Money London Marathon.