After a frenetic July (both politically and culturally), London will use the first fortnight of August to ease off a bit, before the big bank holiday festivities. The big sporting action is far away in Brazil and the Hyde Park mega-concerts are all but over – time to catch your breath. With families out in force, there’s plenty of theatre and open air films to enjoy and they don’t come any more momentous than the launch of the new Harry Potter drama or the BFG film. Magic!

The elegance of sixties style icon, Audrey Hepburn is brought to life via the songs, scenery and shopping that form the main body of this dreamy musical. Pixie Lott takes up the role of New York socialite, Holly Golightly as we follow her through the Big Apple, breaking hearts and bank balances as she goes.The musical draws many of its sources from the original book which is more morally ambiguous than the award winning movie and the role of Holly’s besotted companion is filled out a bit more. Pixie Lott has the voice and moves to convince any audience and she rocks the famous little black dress effortlessly. As for a blonde playing a famous brunette – be mindful that in 1961 Hepburn poached the part from none other than Marilyn Monroe herself.

The open air cinema phenomenon continues to grow in the capital and Luna have launched their most ambitious summer programme yet. The focus is on a mixture of sci-fi blockbusters and vintage classics, ensuring that the entire family will be catered for.Aiming for maximum impact, Luna have matched certain films with suitable venues. Gladiator will be shown against the brooding backdrop of the Tower of London on August 10th, while on the 25th, Kew Gardens will be the lush setting for the reptiles of Jurassic Park. Other venues include Kensington Palace (Some Like It Hot and Four Weddings and a Funeral) and Holland Park (Bladerunner and The Blues Brothers). www.thelunacinema.com 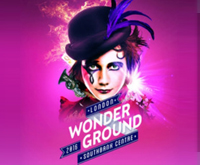 Every summer, this eclectic gathering of circus, comedy and music livens up the area of the South Bank, close to the London Eye. Family events tend to be on in the afternoon while edgier stuff happens later on. There’s plenty of refreshment and food stalls and the River Thames provides some of the best picnicking locations in town.The underlying theme is definitely a left-fielded twist on traditional entertainment and burlesque fans will be spoiled for choice as a procession of divas, acrobats and torch singers evoke pre-war Berlin at its most darkly radical. If the thought of a kids disco fills you with dread, give Monski Mouse a go. This Aussie take on children’s entertainment take nursery rhymes to a whole new funkier level. www.londonwonderground.co.uk

Height of Summer at the Shard – The Shard

For the best viewing experience in London, head to the needle shaped landmark known as The Shard. 72 floors of glass and steel rise 800ft above London Bridge and dominate the capital’s skyline. This Summer, guests can enjoy a glass of champagne on the open air observation deck and view all of London by telescope.On floor 69, an indoor croquet lawn has been set up, complete with artificial grass and Pimms bar. Other events include Saturday morning yoga sessions and a day/night experience which allows you to witness the transformation of the Thames from a sun dappled waterway, into a dazzling light reflecting wonder. www.theviewfromtheshard.com

Following on from the hit Steven Spielberg movie this is an activity driven event that will keep the whole family entertained – think, Pokemon Go with added intelligence. The dream jars are special sculptures that have been distributed around London as if dropped by the Big Friendly Giant character from the Roald Dahl stories.In fact the jars contain sculptures that have been designed by celebrities such as Helen Mirren, Cara Delevingne and Spielberg himself. The idea is to spot them, snap them and upload the image to a special Facebook page. Kids of all ages are bound to have hours of fun chasing around the capital on this whimsical quest. www.visitlondon.com/bfg

A nineteenth century sailing ship is just the right sort of buccaneering location for a cavalcade of comedy acts to amuse the public while sharpening their acts. This year’s event sees the emergence of some significant female talent as Josie Long, Shappi Khorsandi and Lolly Adefope lead a strong lineup.Most of the acts will be off to the Edinburgh Fringe Festival straight after, so it’s a good bet that these routines will be the ones that will go with them. The Cutty Sark has a mini theatre which provides just the right kind of intimacy, along with plenty of atmosphere. Food and drink will also be available. www.rmg.co.uk

The idea behind this celebration of dance music is quite simple. Tracing the roots of today’s dance scene back to the days of disco, soul and early house, the festival boasts a lineup of pioneer DJs from both sides of the Atlantic. Four distinct sections contain a mixture of live bands and DJ sets: Chicago House, Detroit Techno, Old School Garage and Funk.Seminal artists on the bill include Todd Terry, Marshall Jefferson and Soul II Soul. The festival is only two years old but has been an instant success owing to the fact that most of the DJs are still top of their game and working the clubs. www.51ststatefestival.com

Tim Minchin, the musical force behind ‘Matilda’, returns to the West End with an imaginative score to accompany one of the quirkiest romances ever committed to film. Groundhog Day refers to an obscure natural phenomenon that is said to predict the climate for the coming Summer. TV weatherman and all round cynic, Phil Connors is assigned to cover the event and instead gets caught in a time cycle which sees him repeating the day over and over again.This musical version explores the many comedy avenues that time travel throws up with innovative lyrics and catchy tunes and there is a chance to delve deeper into the romance that blossoms between Phil and TV producer Rita. In attempting to break the cycle and win her love, the old cynic has to be replaced by a better man and despite Minchin’s satirical take on small town America, you find yourself hoping for them to settle down and have kids in rural Pennsylvania. www.oldvictheatre.com

This event is fast becoming the daddy of all dance gatherings in London. The festival’s proximity to the highly evolved rave scene in Vauxhall has obviously made big name DJs sit up and take notice and this year’s lineup is as big as they come. Chemical Brothers, Carl Cox and Rudimental have all signed up for one last summertime blow out and the main stages will be packed.The musical focus is on what is known as ‘Big Room’. Pounding bass, stone cold drops and enormous builds which are the main ingredients that go into making a summer dance anthem. Genres come and go but hands-in-the-air crowd participation never grows old. www.southwestfour.com

Critics are in raptures over this skillful dramatisation of the JK Rowling book which was written especially for the stage. Rowling was clever in that she has hard wired the ageing process into the Potter narrative from the start with the movie franchise charting the gang of magicians as they go through their schooldays.In the play, Harry is all grown up and working for the government (Ministry of Magic, natch!). He has three kids and has left his dragon slaying, demon chasing days far behind. However, fate is not finished with the Potter clan yet. It’s time for the wizard mantle to be passed on to Harry’s reluctant son, Albius. It’s great to see a Potter production that relies more on plot than special effects and cameos. Maybe the West End is ready for all the other movies to be re-released this way. www.harrypottertheplay.com
Share