With London aglow with warm rays and good vibes, it’s time to get out and see what this great city has to offer. Traditional pastimes like dining with loved ones or picnicking with the kids never go out of style, but the cosmopolitan nature of our Capital means that there’s always something new to go with the summer months. Instead of trekking through another gallery, why not check out some of the open-air art found in the various public parks and open-spaces. Going to the park for a jog? Try slacklining or drone racing instead. Yes, they may look respectively like fancy tightrope walking and kite flying, but the technology is what makes them seem so fresh. 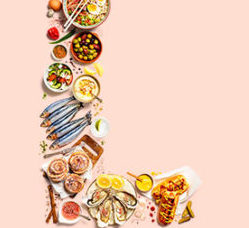 Backed by the London Evening Standard, this month-long feast is a bold attempt to establish the Capital’s reputation as a culinary hotspot that not only rivals Paris and New York, but in some ways surpasses them. Perks Field, which borders Kensington Gardens, has been transformed into a foodie wonderland where visitors can munch through global delicacies over the course of twelve lip-smacking nights.

Angela Hartnett, Fergus Henderson and Tom Kerridge are keeping an eye on proceedings so rigorous quality control will be assured. Casual visitors will probably opt for the street food section which will feature dishes from around the world. London is a global city and has precious little time for jingoistic notions of a “national dish”. Come hungry and enjoy Korean buns, Jamaican snapper and meze from all over the Mediterranean. 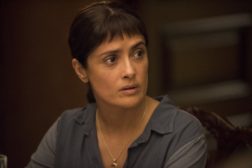 The brainchild of screen icon, Robert Redford, the Sundance Film Festival continues to be a shop window for all things experimental and the ground-breaking in the world of movies. The main event continues to be based in the American Rockies, but this London offshoot possesses the same left field ethos. Each of the films will be shown at the Picturehouse Central venue In Shaftesbury Avenue and include short stories and animation features as well as documentaries and the odd mainstream Hollywood production.

Beatriz at Dinner is one film that will generate plenty of interest, being a satire about a golfing billionaire who mistakes a Mexican therapist for a servant. The ensuing comedy of errors which stars a seriously dressed-down Salma Hayek has been described as the perfect commentary on the Trump presidency so far. Icarus is a documentary whose maker ingests banned substances over a period of 40 months in order to investigate the use of drugs in sport – talk about suffering for your art! www.sundance.org

Grayson Perry: The Most Popular Art Exhibition Ever!

When does “crossing over” become “selling out”? This is the ongoing thorny issue that artists tackle and it is nowhere more exemplified than within the world of modern contemporary art. If Grayson Perry has such doubts, he hides them well. Winning a Turner prize, shooting a documentary or writing funny critiques in the mainstream media all seem to come naturally to him and his latest exhibition is sure to be well attended.

Perry shares his country’s obsession with class distinctions but he is subtle in the way he seeks to subvert his audience’s expectations. Working in the traditional disciplines of pottery and tapestry, he produces appealing items that, on closer inspection, comment on how society changes views on sex, death and the afterlife. www.serpentinegalleries.org

One of the main pillars of the art establishment, the Summer Exhibition is approaching its 250th year and is as exhaustive as ever. Back in the 19th century, the event was something of a free for all, possessing none of the genteel civility that we now associate with art gatherings. Great painters like Turner and Constable would rub shoulders with amateur enthusiasts as everyone jockeyed for the best positions in the gallery.

The result was a series of rooms jam packed frame to frame with art. This riotous bonhomie still informs the exhibition and gives it a bustling street market vibe that is unique amongst London art events. Of course, nowadays the art on show isn’t confined to oil paintings and sculptures. Contemporary work, pop art, photography and installations also play a large role. Each of the pieces is for sale and there are experts on hand to help visitors take their first steps as art collectors. www.royalacademy.org.uk 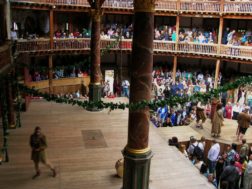 As a gift to the rest of the planet, Britain could have hardly done better than Shakespeare and the Globe Theatre does a superb job in curating the work of this once-in-a-millennium genius. It also manages to educate its audiences with revivals of some of the Bard’s medieval works that prove that the world’s greatest playwright did not exist in a vacuum. Tristan & Yseult is one such example. Based on a 12th century Cornish legend, it is a story that bears striking parallels with some of Shakespeare’s great romantic tragedies and is therefore an important historical document as well as a gripping tale.

It tells of a royal love triangle between a noble knight and the beautiful damsel that he was charged with protecting. Instead of escorting Yseult to meet and marry King Mark, Tristan drinks a love potion and elopes with her. Feasts, battles and love scenes all follow one another in quick succession and the end is pure Romeo and Juliet. 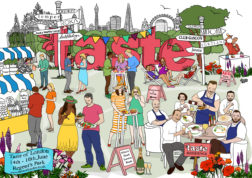 Taste is, without a doubt, one of the most hands-on events of its kind. Due to the way the festival is scheduled, it makes it easy for inspired visitors to try out ingredients or techniques without waiting to get home. After watching top chefs including the like of – Tom Kerridge and Ollie Dabbous explain how flavours and textures are combined in their restaurants, enthusiasts can then get their hands dirty at the Take Taste Further kitchen.

Good food is only part of the story though and the event has increasingly spotlighted craft beer launches, champagne tastings and new cocktail brands. This year, a fire pit will be available to roast your favourite fruit and vegetables to perfection. Sponsored by top supplier, Natoora, it’s an innovative way to spice up your palette with hunting for obscure ingredients. www.london.tastefestivals.com

Not having an intimate knowledge of the Bible shouldn’t stop art lovers from appreciating pre-Renaissance painters of which Giovanni Da Rimini is a one of the most foremost. As his name tells us, Giovanni was based in the port of Rimini in the turn of the 13th century and this fact lends a unique slant to his work. He was, like others, still confined to religious work with the Church forever looking over his shoulder, but living on the Adriatic coast brought Giovanni into contact with influences different to from those found in medieval Europe.

Art from the Byzantine lands of the east, together with the geometric patterns of Islam started to seep into his work and the practice of using perspective started to affect the way his subjects were presented. In a painting of Jesus and the Apostles, Giovanni arranges Peter, James and John around the Christ in order of importance instead of having them all uniformly arrayed on either side. The Age of Enlightenment was still far in the future but Giovanni shows intriguing signs of independent thought even then. www.nationalgallery.org.uk

Who would have thought that the perfume industry has been harbouring in its fragrant midst, a rebellious streak? Behind the glossy big name brands, contemporary “fumeheads” are shaking up the way we interact with what we think is our favourite scent and people are sitting up and taking notice. Charcoal, ink and desert winds are among the smells used as inspiration for some of the latest products and with this exhibition of 20 top modern scents, their producers are stepping out of the shadows.

They will also be on hand to explain the thinking behind some of the wilder examples. Being part of an online community, they come from all backgrounds and cultures and are unified by a desire to expose people to their emotions instead of promoting a culture of cover up and concealment. www.somersethouse.org.uk 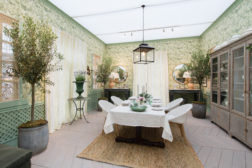 In Britain, you know that you’ve had a good summer when it feels as if you’ve spent about as much time in the garden as inside. Preparing for the warmer months doesn’t mean that you can let your interiors slide however and the House & Garden Festival is on a mission to assist us in the all-round planning which helps us enjoy the warmer months without fuss or bother.

Comprised of three complementary and interlocking events, the event is focused on the practical, fun and colourful ways which we can enhance our environment. Spirit of Summer is a showcase for accessories and interior design ideas that can liven up the house. Grow London seeks to inspire the urban gardener with projects that can fit into any space. House is ideal for those looking for that one piece of furniture that transforms a room from good to great. www.houseandgardenfestival.com 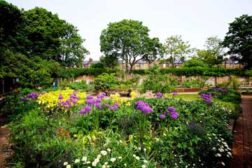 Discovering a never-before visited patch of greenery is a sort of hidden pleasure that many Londoners indulge in. They may not want to shout too loud about it, in case it gets overrun with tai chi classes and Bugaboos, but they’ll gladly let you in on the secret if you’re into plant life and peaceful surroundings. Normally closed to the public, 230 spaces will be thrown open in a bid to educate Londoners on ways we can all contribute to conservation and biodiversity.

During the weekend of 17-18 June visitors can enjoy traditional garden, experimental roof projects and that great British institution: the allotment. What is really surprising is the sheer variety of businesses, schools and shops that lovingly tend to onsite plant life.