Where to Watch the F.A Cup Final

May sees summer kick into gear; trees are full of life, it doesn’t get dark until 7pm and the big winter jackets are well and truly tucked away in the wardrobe. It’s also the month of the F.A Cup final, one of the major sporting events of the year. The F.A Cup has been a regular fixture on the English football calendar since 1871 and is the world’s most famous cup competition.

This year it will be contested at the 90,000 capacity Wembley Stadium on May 30th, by North London club Arsenal and Midlands-based Aston Villa. If you don’t have a ticket (let’s face it, that’s most of us), then read our guide featuring the best places to catch the action.

As recommended by our Ealing branch

It might seem strange that a hotel kicks off our list, but The Drayton Court Hotel in Ealing is known as a popular destination to watch football thanks to its dedicated sports bar. There’s a quiet area where you can have a chat and an outside space, just in case everyone in your group isn’t as enthusiastic about watching the game as you are.

As recommended by our Highgate branch

Ok, so this one might not be a bar or pub, but you’ll still be able to purchase alcohol. If you can’t get a ticket to Wembley, the next best way to watch the game is at the Emirates Stadium, home to finalists, Arsenal. The stadium will construct two massive screens and welcome 25,000 people to watch the game in an authentic atmosphere. Probably not a good idea if you’re an Aston Villa fan, though. Entry costs £5.

Highbury Stadium Square is nearby the stadium and as any Arsenal fan will know, it used to be the iconic home to Arsenal Football Club before their move to the Emirates. We can’t think of anything better than supporting your team than to live in their former home. Rentals start from £350 per week.

You won’t want to watch the game on an empty stomach; thankfully The Dukes Head Yard Pub in the leafy area of Highgate offers fabulous food. They also have a selection of craft beers and ciders from independent brewers, along with fine wines and whisky; the latter may be appropriate if your team doesn’t get the result you were hoping for .

As recommended by our Knightsbridge branch

The F.A Cup final is one of the most prestigious fixtures in the football calendar, so it makes sense to enjoy the occasion surrounded by luxury. The Sporting Page is a popular sports bar situated in Chelsea, close to other fashionable areas such as Sloane Square, the King’s Road, and South Kensington. Famous past visitors include Mick Jagger and Princess Margaret. While the bar may be more associated with Chelsea FC fans, we’re sure they won’t begrudge another London club victory on May 30th.

This independent pub on Sydney Street in Chelsea has its own racing club, The Sydney Arms, so they definitely know how to look after sports fans! You’ll find a mixture of international chefs serving different food from your usual pub offerings – try the duck scotch egg while you watch the two teams battle it out for supremacy.

As recommended by our Imperial Wharf branch

Located on The Boulevard at the Imperial Wharf property development, The Waterside offers you comfy booths on outdoor decks overlooking the Thames. Throw in 42” HD TV screens and you’ve got a great setting to enjoy one of the most important football matches of the year. Result! 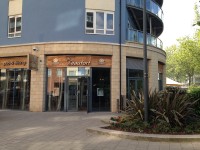 As recommended by our Beaufort Park branch

This stylish Young’s pub has become a popular drinking spot for tenats renting properties at Beaufort Park, a popular property development in Colindale. Its North West London setting means there will be a big turnout of Gunners fans supporting the north London club.

As recommended by our Canary Wharf branch

This pub on Hertsmere Road used to house the ledgers of shipments to and from the area’s West India Docks. Today the renovated space serves a good selection of beers and has a pleasant outside space; ideal to watch the final in the sun, weather permitting.

As recommended by our City branch 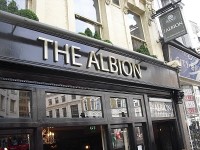 The Albion is located between St Paul’s Cathedral and Blackfriars Bridge and serves delicious food and a great selection of beverages. They also happen to love showing sports; lots and lots of sports. The landlord is a known sports enthusiast, so bring your friends and revel in the wide screen he likes to get out for the big games.

As recommended by our Greenwich branch

The Lost Hour is conveniently named considering the amount of emotions you’ll go through during an intense 90-minute plus football match. You may even want to add a couple of extra hours on top for emotional stress. It’s a good thing then that you can at least enjoy the relaxed vibe to try and calm your nerves in this recently refurbished pub on Greenwich High Road.

As recommended by our Hampstead branch

Hampstead is located just five miles from Arsenal’s football ground and the area has a huge Gunners following. Get yourself down to The King William IV pub on Hampstead High Street and join the many red and white shirts willing the boys in red on. After the result, why not go for a scenic stroll along Hampstead Heath or take a look at few rental properties along the quiet back streets?

As recommended by our Hyde Park office

Although Charles Dickens may not have been an expert sports pundit, he certainly had his way with words, and if The Victoria’s claims are anything to go by, he was an avid visitor to this pub on Strathearn Place. So raise a glass to his literary genius and then pump a fist to your team hopefully getting the right result in the final.

As recommended by our Kensington office

If you want to catch the excitement of the final in a traditional setting, stop by this Kensington pub – a firm CAMRA supporter, and tuck into some fish and chips or a burger with all the trimmings accompanied by a selection of cask ales and great wines. Once you’re finished, you might want to check out a few Kensington rental properties fit for FA Cup champions.