“The cheque is in the post” has been replaced by “Christmas for kids” as the biggest winter myth in London. This is partly because both cheques and post will soon be going the way of the dinosaur, steam trains and Arsenal’s title aspirations. There’s no doubt that London has now become seriously fun during the winter months. The capital abounds with festive thrills that cater for every age group, so planning your seasonal entertainment is a fairly straight forward business. Here’s how to make sure everybody stays jolly and jingly with our guide to the best winter activities in London.

For stuff that’s a bit off the beaten track, start by wandering through a maze made totally out of fir trees in the Vauxhall Pleasure Gardens. Hop on the Overgroundto Hampton Court where you can experience the interactive light trails that change colour as you walk by.Over on the other side of London, Winterville, in Hackney’s Victoria Park, is a hip alternative to the more mainstream West End attractions. If your teenager is the only one who can recognise the tunes that the ice rink DJ is spinning, then congrats – you’re are officially cool! Dance genres tend to dominate the London gig scene around this time, largely because of Christmas parties that steadfastly refuse to stay in the office. Basement Jaxx bring their exuberant rave anthems to the O2 in December while the eternal hipster that is Neneh Cherry previews her new material at Camden’s Electric Ballroom in January. 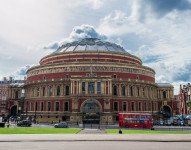 In December, the Royal Albert Hall in Kensington resembles the annual meeting of the Musicians Union – such is the frequency of classical recitals, live film score renditions and Christmas carol spectaculars. The famous tree in Trafalgar Square is one of the main seasonal focal points and culture vultures can pop into nearby St Martin-in-the-Fields for one of the many classical recitals taking place during the winter months. The Wedding Dresses 1775-2014 exhibition continues to be a popular draw at the V&A museum. It’s closing in the spring so there’s still time to check out what all those celebrity brides had to put up with.

No snow? No problem! Die-hard winter sports lovers can grab a train from Euston and be at the Hemel Hempstead Snow Centre in just half an hour. A 160 metre man-made slope is sure to provide a stiff test for even the most experienced skier or snowboarder. Back in London, the capital seems to have experienced something of an ice rink “boom”. They’re just about everywhere: from forecourts of grand historic buildings to purpose-made fun parks. Winter Wonderland in Hyde Park is the best option for combining skating with fun-rides and child-friendly attractions. 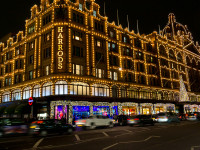 Of course some of us just want to go old school. Turkey, mulled wine, Santa and a show are what make the season for us. A three course Christmas dinner up on the rooftop of Babylon in Kensington, followed by drinks in the Winter Terrace is just the fortification needed before taking the kids to Santa’s Grotto in nearby Harrods. When it comes to seeing a family show, the West End can do festive à la The Snowman and White Christmas or it can do spectacular as in Lion King and Matilda. For the ultimate combination of classic Christmas fun and contemporary entertainment, be sure to book Eric and Little Ern at the St James theatre. It’s an affectionately funny homage to Britain’s greatest comedy duo who were also perennial fixtures on TV during the winter holidays.

Whatever you’ve got planned for the season, we send festive greetings to you and yours. Have a wonderful yuletide break!