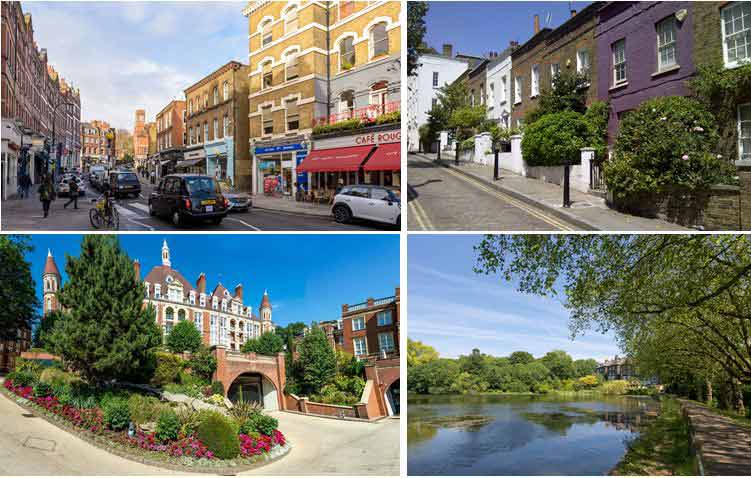 The medieval village of Hampstead offers an authentic village experience, with its cobbled alleyways, quaint cottages, tree lined streets and 800 acres of glorious untamed wilderness, all within a few miles of arguably the greatest city in the world.

Soak in the nostalgia

This picturesque London suburb has enchanted artists, literary figures and the rich and famous for centuries, since it established itself as an iconic spa resort in the 18th century. To live in Hampstead is to be part of a cosmopolitan community; to browse through local boutiques and gourmet patisseries on the charming High Street; to enjoy a good tipple at the traditional village pub once frequented by Jude Law and Liam Gallagher; to take a delightful stroll through the historic streets that played host to some of the greatest intellectuals and influencers of our times including  John Keats and Sigmund Freud, and to take in the views afforded by this unique village.

The timeless appeal of the prestigious and sought-after NW3 postcode commands a justifiable premium in property prices and it is believed that more millionaires reside within Hampstead than any other area in the UK. Families are drawn to Hampstead for its village atmosphere and proximity to good schools while young professionals prefer to rent properties in the more affordable West Hampstead due to its excellent transport links which offer quick services into the City and Canary Wharf. Hampstead properties have a high aspirational value and the affluent neighbourhood features some of the most expensive housing in London, ranging from stately Victorian mansions to imposing detached homes, impressive maisonettes to distinctive terraced houses.

Over the years Hampstead has gained an enviable reputation for attracting some illustrious figures across the arts, entertainment, sport and business fields. High-profile personalities who have lived or stayed in Hampstead include intellectual, artistic, musical and literary icons such as Elizabeth Taylor, H. G. Wells, Judy Garland, Charles Dickens, Dame Judi Dench, Ricky Gervais and many more. Last year celebrity chef Jamie Oliver purchased a 10 million pound mansion in Hampstead, no doubt attracted to the relative anonymity he enjoys in the tranquil residential neighbourhood. So don’t be surprised if you exchange pleasantries with One Direction superstar Harry Styles or television presenter Jonathan Ross at the local grocery store in Hampstead.

As residential letting agents based in Hampstead since 1956, we are privileged to be surrounded by exceptional period architecture including striking Edwardian and Victorian townhouses, Georgian cottages, mansion blocks and apartment conversions. The famed Church Row, one of the most attractive streets in Hampstead Village, features ­­handsome Georgian properties. Family homes on the ‘Crofts’, a collection of tree-lined avenues command premium rentals as do areas in the vicinity of the Heath such as East Heath Road, long regarded as the home of footballers, movie stars and hedge fund whiz kids. Hampstead affords a range of residential property options from elegant conversions to contemporary apartments, reinforcing the fact that it enjoys popularity amongst both families and young professionals. Rentals for a typical two bedroom conversion start at £475 per week while the average price for renting a terraced house starts at £1250 per week.

Sandwiched between Hampstead and neighbouring Highgate, is London’s largest ancient parkland, Hampstead Heath. Spreading over 800 acres, this untamed and undulating expanse has inspired artists, writers and poets for over a century. Featuring three public ponds, for those adventurous enough to brave the notoriously unpredictable London weather, and mesmerising views of the city skyline from Parliament Hill, it is often hard to believe that this glorious idyll lies just four miles from Charing Cross.

Hampstead is ideally positioned offering convenient transport links to the City and West End in 15 minutes and Canary Wharf in half hour via Hampstead station, which also happens to have the deepest station platforms on the London Underground at 58 metres (193 feet) below ground. Residents are spoilt for choice with a range of Tube stations nearby in Belsize Park, Swiss Cottage and Finchley Road. Connectivity extends to a range of bus and National Rail services.