Radio version of this breaking news

With many Malaysians investing in London property, Marc von Grundherr, Director at Benham and Reeves talks to leading radio station BFM 89.9 about the rise in fraudulent tenants and what you need to know.

Research we commissioned recently has revealed the increasing level of fraudulent property rental applications in the UK rental market, how this has ramped up in the last year and the tricks of the trade being deployed to fool letting agents and landlords. 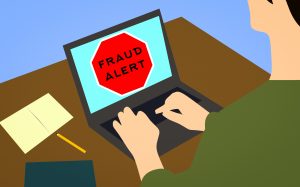 Using data from our referencing agency, LetRef, we found an average of six fraudulent applications a month in 2018, using either fake bank statements and fake or cloned employer references in order to pass the referencing stage of the tenancy process. So far this year, this has already hit an average of 13 per month – a 117% increase each month.

With the introduction of the Tenant Fee Act 2019 meaning letting agents can no longer charge tenants for references, it’s expected that the level of fraudulent applications will continue to increase as these applicants know it won’t cost them a penny should they fail, all while landlords’ foot the bill. In June, the number of fraudulent cases has already increased to 16, above average despite the short time the ban has been implemented.

This surge in fake applications is a very worrying statistic for a rental market that is already straining under the current requirements of a ‘Generation Rent’ and this increase demonstrates the importance of using a bonafide referencing company, where staff have been given specialist training from the National Crime Agency on recognising fraudulent documents.

Unfortunately, the majority of referencing companies do not even collect ID and proof of address and conduct referencing as a sideline, in order to up-sell other services and earn commission. Letting agents using one of these companies or making checks themselves are highly likely to end up with these fraudulent chancers flying in under the radar and into a rental property.

We are one of only a small number of agents who aren’t passing the cost of a thorough referencing service onto landlords despite the changes to legislation, and we will continue to ensure that the appropriate checks are being made. It’s the professional duty of all letting agents to properly validate the tenants they are providing to their landlords and failing to do so with the utmost vigour simply isn’t acceptable.

Below are three real-life case studies of attempts to secure rental properties using fraudulent documents. As you will see, some of the applicants are extremely convincing but fraud can be detected from the smallest slip-up. 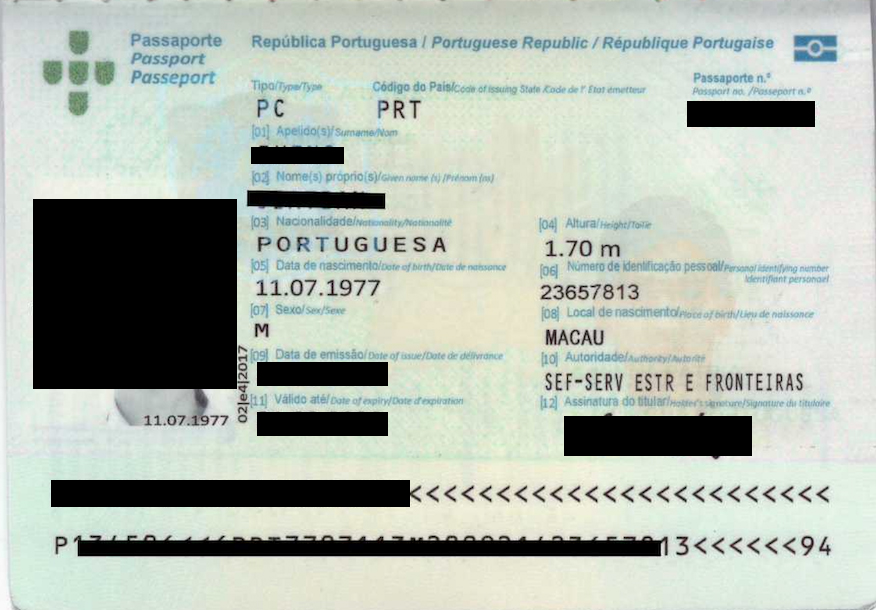 A fraudulent application from a male applicant which it transpired, was actually part of a serious criminal case. The applicant appeared on the electoral roll and was linked to previous addresses, so this was very well planned, and they had clearly been renting properties fraudulently through other companies for years, something that was later confirmed by the police.

He stated he worked for a company which does exist, but a cloned website was set up with a similar domain name. He was discovered due to thorough checks on all the domain names and referees involved and tracking down the real employment referee through internet searches, who confirmed that all reference info received was fake.

The bank statements received were also very good fakes and the passport received was fake but passed an AML check. However, there were a few discrepancies and it was confirmed as a forgery and one created specifically for renting illegally.

The landlord reference received was also fake and the name was recognised from another fraudulent case. 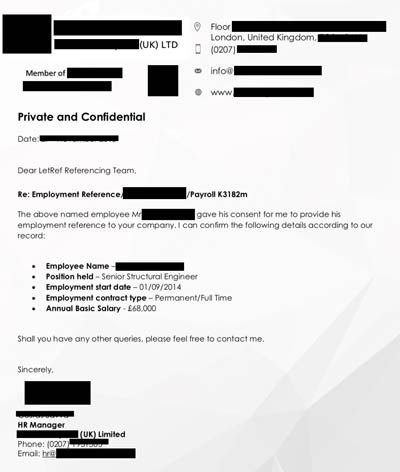 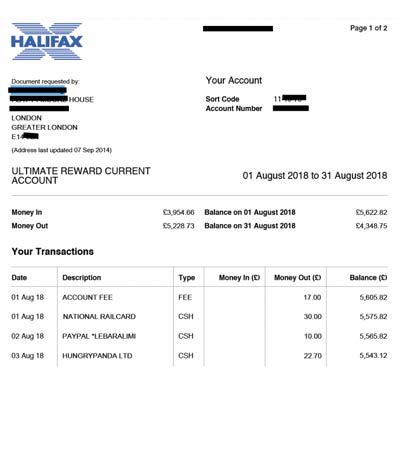 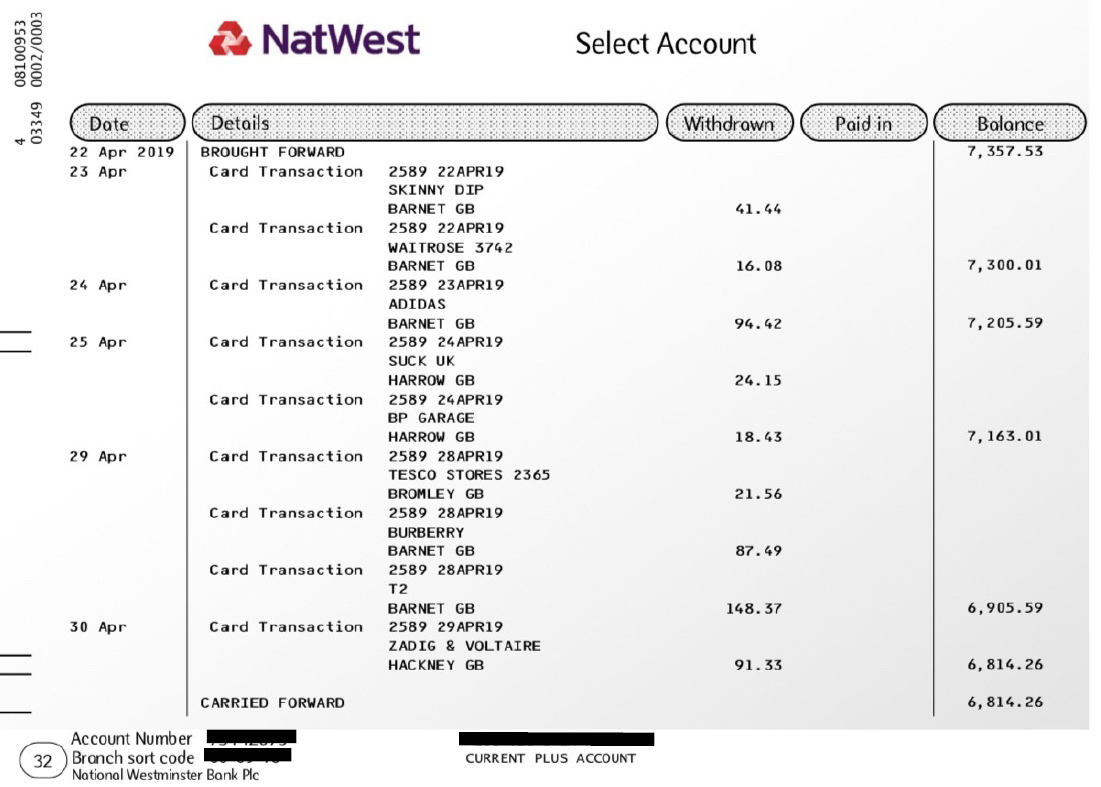 A fraudulent application from a female applicant. The applicant showed absolutely no links to the current address and she had supposedly been living there since 2015.

This was flagged due to not allowing the applicant to self-credit check, something that would have otherwise been missed by agents who do. The landlord reference was also not adding up as she could not have possibly been present at this address for the amount of time stated. The applicant did not provide her passport and said it was expired and refused to answer any calls or messages asking for the expired passport as proof. A tell-tale sign was also the similar formatting of the referee’s emails e.g. name111@gmail.com. The employment reference received came from a domain name that was created the month before and there were no contact numbers on the reference. The website did not work on the first round of checks and by the second day there was a very rudimentary version with a US phone number. On calling that number, it was discovered that it was an auto-divert to a GP surgery who had no knowledge of the company.

The applicant also provided three months’ worth of bank statements which showed a salary being paid in and rental payments going out but these were also fake, just incredibly good fakes. 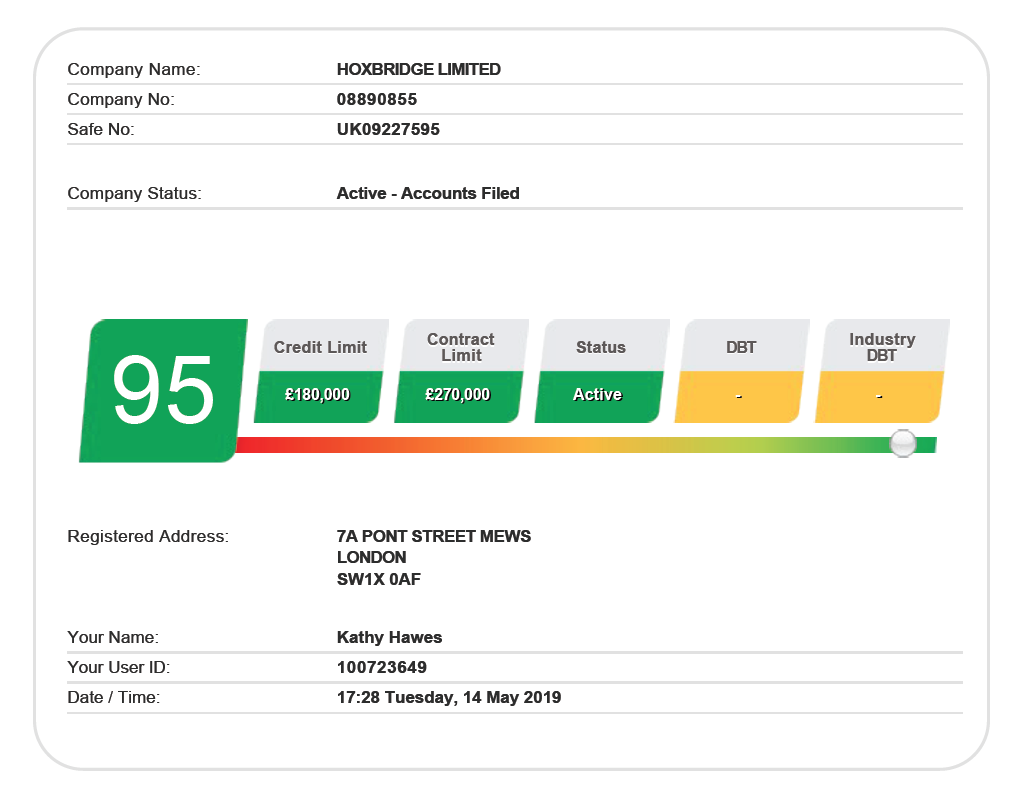 A fraudulent application from a company applying for a company let. This company has a fantastic credit rating so may well have passed with a company that did not carry out any further checks as our referencing company did.

Further checks revealed that there had been a huge increase in shareholder funds, several changes of directors and that the suspected fake accounts had been added to Companies House.

An accountant’s reference was requested, at which point it was also discovered that the domain name of the company and the accountant provided had been created at exactly the same time. 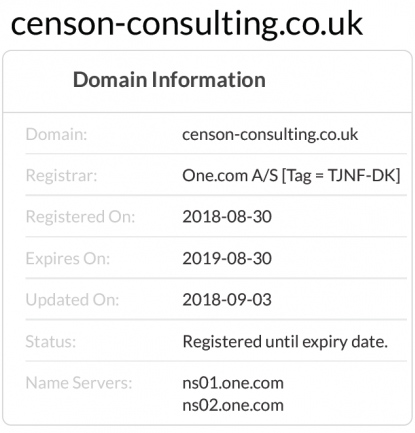 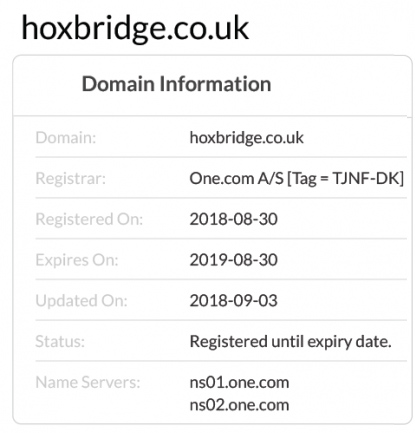 The accountant’s number did not connect to the correct place and the website did not work properly. This provided no doubt that this was a fraudulent company trying to submit a tenancy application and so the client was advised to cease the lettings process with them.

Preventing fraud before a tenant is allowed to rent your property requires vigilance and a good deal of experience. If you are a landlord reading this and you are not using an agent to let your property, you could be putting yourself at risk. Even with the best checks in place, it is easy to get conned and cost you a lot more in the long run. Do get in touch to learn more.

A surge in rental enquiries as London life returns to normal