Ten reasons to make your home in Hampstead

For those who take comfort in knowing that most of life’s pleasures can be enjoyed within a short stroll from their front door, Hampstead is the ideal neighbourhood. Culture, beauty and well-being fill its historic streets, intriguing shops and cosy eateries. It’s no surprise that virtually anyone who appreciates beautiful surroundings will naturally gravitate towards this leafy, affluent hilltop village that offers everything needed for the perfect cosmopolitan lifestyle.

The largest urban parkland in Europe, Hampstead Heath is never more at its best than when the dawn mists are rising from its treelines and the air is crisp and fresh. Walking the Heath is a must – not just for the postcard-perfect views of London, but also for social interaction and none more-so than dog walking.

Dog walkers are a sociable bunch and love nothing more than chatting amongst themselves while their dogs run and explore. Dog meetups are a big weekend thing on the Heath and are a great way to help socialise your pet. Information about these informal events can be obtained via numerous Facebook groups and communities which are all catalogued on Dogvine.

The benefits of wild swimming have been recognised since ancient times and is championed by pioneers like Wim Hoff. Recent years have seen an explosion of interest and Hampstead, with its year-round, open-air swimming ponds is the natural destination for enthusiasts and experimenters alike. There are three ponds on Hampstead Heath: the mixed bathing facility is the nearest to the High Street, while the Ladies Pond is further north, near Kenwood House, and the Men’s Pond is on the Highgate side.

For kiddy-friendly swimming, take a look at Parliament Hill lido with its un-heated outdoor pool which is open all year round.

Hampstead’s mix of immaculately preserved Georgian cottages, Victorian conversions and Edwardian residences is an absolute dream for enthusiasts of architectural history. For centuries, churches like Hampstead Parish Church, Christ Church and St John’s have been seen as symbolic landmarks as well as places of worship and community centres. 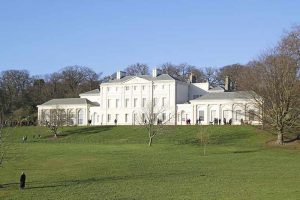 The Hampstead Antique and Craft Emporium is a unique antique hub hidden away in the heart of the village, reached by a charming courtyard, while the streets around it are dotted with independent art galleries, namely Clarendon, Catto and Zebra One – all well worth a visit.

Birthplace of many great acting careers, Pentameters Theatre has always served as a handy try-out space for playwrights and directors – many of whom lived in the neighbourhood. Today it is incorporated with the lively Horseshoe gastropub and is still a place to meet, eat and share showbusiness gossip. On the opposite side of the street, the Everyman Cinema has become an inspirational brand for serious movie buffs by combining curated cinema with an emphasis on home comforts, hip music and special events.

Many celebrities from the world of entertainment live in Hampstead. Among them are musicians, Harry Styles and Boy George, together with actors, Helena Bonham Carter and Ricky Gervais. Eminent author, John Le Carre (The Night Manager) was also a long-time resident and many of his fictional spy encounters take place in and around the neighbourhood. Celebrated fashion and interior designer Mathew Williamson, has turned his ground-floor Victorian conversion apartment into an exuberant synthesis of electric colour and tropical influences that celebrates his quirky sense of humour and sharp eye for design detail. 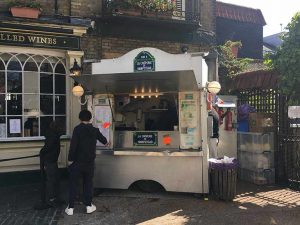 Hampstead has its own take on street food which is probably a bit less grungy than what you’d find in the new East End or Camden. The long-running La Creperie de Hampstead is a firm local favourite that serves up delicious crepes from a stall just off the High Street. Elsewhere, there is a fine selection of artisan bakeries and Mediterranean-influenced delicatessens. Gail’s, Paul’s and Le Pan Quotidien are popular bakeries that offer delicious pastries, sandwiches and snacks or you can find sumptuous hand-made chocolates and ice cream at Venchi the Italian chocolatier.

If you’re a big believer in shopping locally, then the independent food shops of Hampstead can provide top quality produce that you can turn into delicious, restaurant-quality meals. The Hampstead Butcher & Providore is a typical example of the genre, with its eye-catching shopfront and cool retro vibe. Apart from a superb selection of meat, poultry, pies and charcuterie, the shop sells artisan cheeses, fine wines and upscale ready-meals. Over the road in Hampstead Community Market, you can get top-quality fish and shellfish from Hampstead Seafoods. For fruit and vegetables, check out Jenkins and Son on the High Street.

Hampstead has always attracted independent fashion designers and their shops give the main thoroughfare a sense of style and flair. Maje, Sandro and Tara Jarmon all have outlets in the village and remain firm favourites for their unique approach to women’s ready-to-wear clothing lines. Well-regarded chains like Kurt Geiger, Hobbs and Jigsaw are also popular as are a handful of faithful independent boutiques which have been in the area many years.

Dining out in style – Restaurants

The dining-out scene is made up of a healthy mix of established favourites and family-friendly gastropubs. Sophisticated palettes are usually drawn to Villa Bianca (Italian), La Cage Imaginaire and Le Cellier du Midi (French). Japanese lovers have Jin Kichi and the 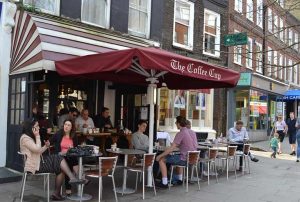 Sushi Shop on the High Street and The Coffee Cup is just one of the places where Hampstead residents like go for a traditional English breakfast. Hampstead pubs have a deserved reputation of hosting long Sunday lunches that offer some of the best roast dinners available in London. The Freemasons Arms, with its log fire in the Winter and sunny beer garden in the Summer, provides a delicious final destination after a leisurely Sunday morning stroll on the Heath.

A drink and a chat – Pubs

Hampstead drinking spots embraced the gastropub phenomenon quite early on, but they have also managed to retain their history, character and clientele. They remain quirky and full of legendary stories of famous actors, poets and artists. Here are some examples:

The Flask contains some of the finest surviving examples of chromolithography in London. They are representations of paintings by the Belgian painter, Jan Van Beers (no pun intended). 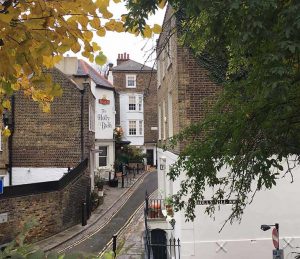 The Wells Tavern is named after the water source that first drew artists to Hampstead as they sought to escape the pollution of Central London. The William IV is believed to be haunted by the ghost of a former landlady who was murdered by her husband on the premises (yikes!).  Worth the walk up the hill to reach it, The Holly Bush is probably the most ‘local-feel’ pub in the area, with its charming façade and cosy location.

Dating from the late sixteenth century, Spaniards Inn is so revered, that Hampstead Way had to be built round it. It was here that the poet Keats composed his famous “Ode to A Nightingale”.  The pub is a short stroll away from the imposing neo-classical villa Kenwood House, formerly home to the reformist Lord Chief Justice William Murray and now a popular summer music venue and museum.

Taking in the view – Parliament Hill 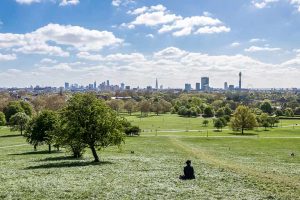 For the ultimate in photogenic views of our great city, it’s best to head to Parliament Hill, a vantage point that is geographically adjacent to the Heath, but has better sightlines. It’s a great place for taking dawn photographs of the skyline as the sun comes up over your left shoulder and sets up the picture perfectly. Kite flying, picnics and New Year firework displays are also a major feature here.

Although it can be considered by some as an exclusive affluent enclave, Hampstead remains fairly accessible and welcoming as a place where culture and social enjoyment go hand in hand with the finer things of life.

To get a flavour of what Hampstead is like, take a look at our Hampstead video guide

If you are considering selling or buying in Hampstead, contact our Sales team who would be happy to assist you.

Most family homes in North-West London achieving above guide price