The space and time necessary to visualise and create is important to Londoners – no matter what stage of their development they find themselves in. Writing a script or designing a jacket may look like sedentary but sometimes the creator has to move around in order to be creative. London homes provide that freedom and if space runs out, the surrounding streets more than make up for it – in fact sometimes it’s better to just grab your camera/sketch pad/pet and hit the pavement for some true inspiration.

It’s one ‘o clock in the morning outside a North London takeaway and Taylor Swift is aiming a chicken burger at someone’s head while members of her squad restrain her with shouts of “Leave it Tay, she’s not worth it!” Before you start thinking about how quickly music careers can plummet, this is basically the setting of one of Swift’s latest video shoots which uses the real streets of Kentish Town as a backdrop.

The current queen of pop has an affinity for the Capital that extends beyond her habit of dating Brit thespians. She regards the period homes and leafy streets as a form of escape and release while at the same time having some historical character. There are certainly many properties for rent in the vicinity that can conjure up similar feelings. 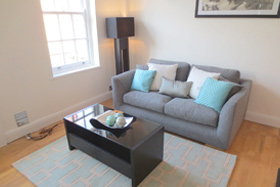 Edward Enninful is about to make history in London. The fashion world is waiting with bated breath as the first new British Vogue editor-in-chief for 25 years gets ready to launch his debut issue. As a result, Enninful hasn’t really had time to sort out any established London routine, preferring to work closely with his team at Vogue’s Mayfair HQ.

One member of the new fashion crew who doesn’t seem to be fazed by this itinerant situation is Ru, the editor’s beloved Boston terrier. Greeting every visitor to the office with a friendly sniff, he seems to be ready to make W1 his permanent base. Discerning renters in the neighbourhood would no doubt agree.

When the novelist JM Barrie was dreaming up his legendary fable of eternal youth and magical pirates he often paid a visit to Kensington to get inspiration from his friend’s children. It was a move that so many authors make because, after all, nobody fantasises quite like an eight year old, right? The result was an enduring tale of a boy-prince battling to save his beloved “Neverland” from the clutches of the evil Captain Hook.

The top floor of the home that inspired what became Peter Pan is now up for sale for £1.37 million and it’s easy to see why the children who lived their allowed their imaginations to run riot. Stucco-fronted and overlooking a picturesque square, it was a place that conjured up dreams of flying to another world. Large parts of Kensington still work the same kind of magic.

Like many multi-talented creatives, Alex Garland not only needed centralised locations like Primrose Hill and St John’s Wood as a base to network from, but also the necessary space and light needed to get his imagination working at full capacity. As a writer and emerging screenwriter, he initially found that a converted piano factory in Primrose Hill more than suited his needs.

The large open plan design now incorporates solar panels, a roof terrace and reclaimed wood flooring and is more than adequate for the next generation of visionaries. Garland is now a major Hollywood director and is set to release Annihilation – a new sci-fi epic starring Natalie Portman. Budding futurists will find plenty to inspire them in this area of London.

If you’re looking for a new property to rent in London, we’ve got lots of property in areas where you could be rubbing shoulders with the rich and famous. To find out what’s available, search our property listings.