Not so long ago, a visit to Wembley meant that you were either attending an important football match or a must-see concert. This is because of Wembley Stadium’s history of hosting defining moments like the World Cup Finals and huge memorable concerts such as Live Aid back in 1985. As the most recent Euro 2020 football encounters proved, the venue is long associated with creating memories and collective celebration.

This corner of North West London has always had a sense of community and a lively High Street but was more well-known as a destination rather than a place to live and thrive in. But this all changed when a new and improved stadium opened in 2007 shortly followed by a £2.5 Billion regeneration plan which kickstarted a wave of change, growth and investment that continues to this day including the introduction of high specification new rental apartments for today’s professionals and aspirational families.

The rise of Wembley Park

The rise of a new sports/entertainment infrastructure has encouraged a corresponding increase in new high-rise homes, complete with stunning views of the Wembley arch and views beyond; modern facilities and proximity to fast transport links. The changes that new property developments have brought about have been transformative and Wembley Park is now a thriving, new district with a bright and breezy outlook, a high-fashion shopping quarter and a great future.

The standard of accommodation has jumped to such a level that international students, local professionals, young families and Hong Kongers arriving under the BNO visa scheme are all looking to rent in Wembley Park. 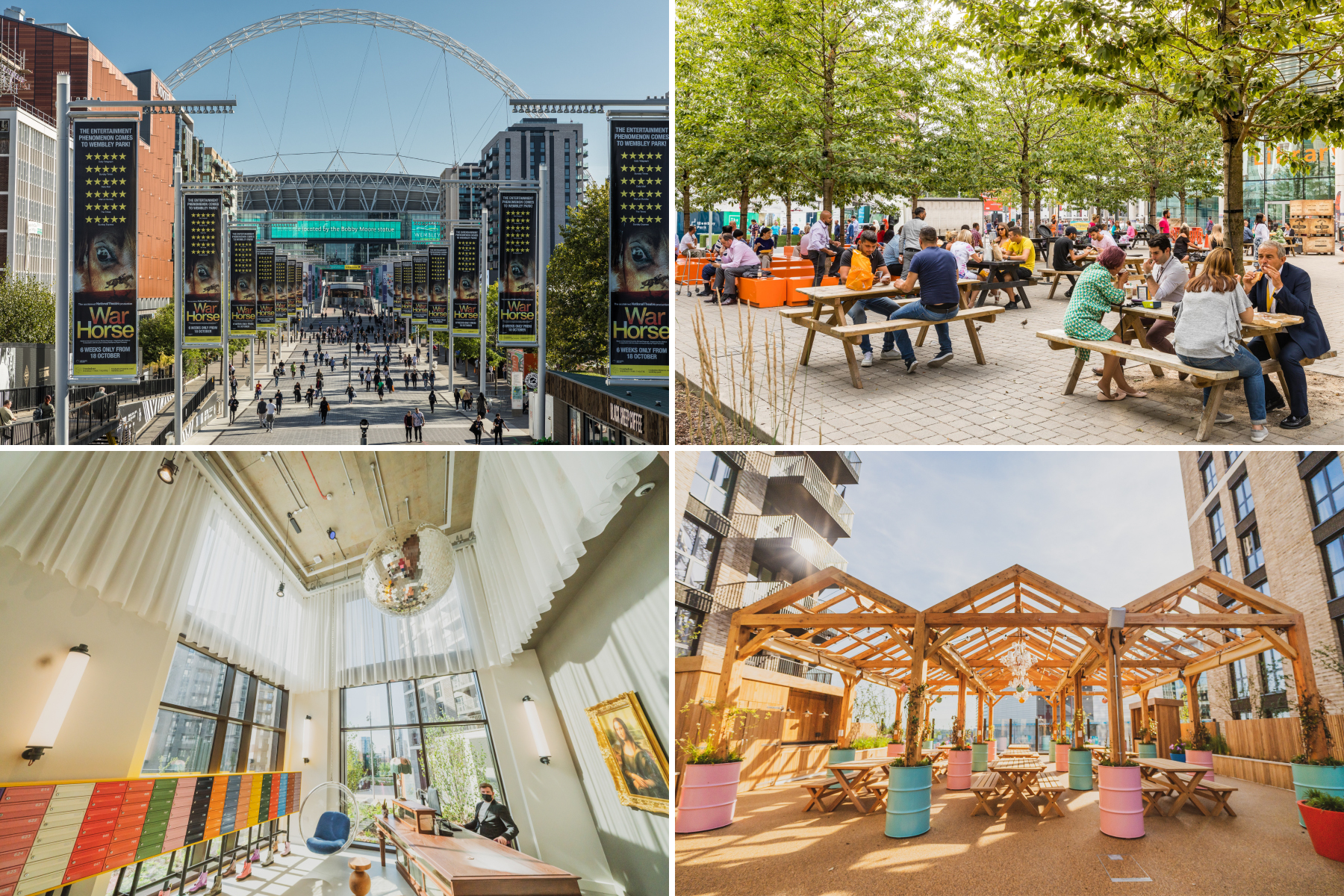 The impression that Wembley Park makes is immediate and impressive. As you step out of the expanded nearby Underground station, you are immediately signposted through to the stadium campus via a wide pedestrianised boulevard which opens up to a series of tree-lined squares and plazas. From here, all of the neighbourhood’s exciting amenities are within easy walking distance. On one side, there is a series of eye-catching, pet-friendly new housing developments, each containing beautifully designed apartments, top-quality facilities and great views. On the other, you’ll find a wide selection of places to eat, family restaurants, retail spaces and landscaped parkland.

Things to see and do in Wembley

Everywhere you go, there is a sense of adventure and vibrancy. Wembley Park is fast becoming a focus for street art, informal music performances and pop-up restaurants. Two main hangout areas are BOXPARK Wembley and the London Designer Outlet (LDO). The former is a collection of 22 street food outlets that are as authentic as they are accessible. Home-style Caribbean, artisan pizza and South American BBQ are all fully represented and it’s a great place for trying out something new like the Taiwanese bubble teas from T4 or the artisan donuts at Longboys. The LDO is the place to go for bargains on designer clothes and shoes. Top brands range from Calvin Klein to Superdry and discounts can reach up to 85%. Both of these mini-venues come with great entertainment options. At BOXPARK, you can try indoor golf, axe throwing and glow pong as well as catching a performance at the Troubadour Theatre. Aside from shops, the LDO also houses a multiplex cinema. 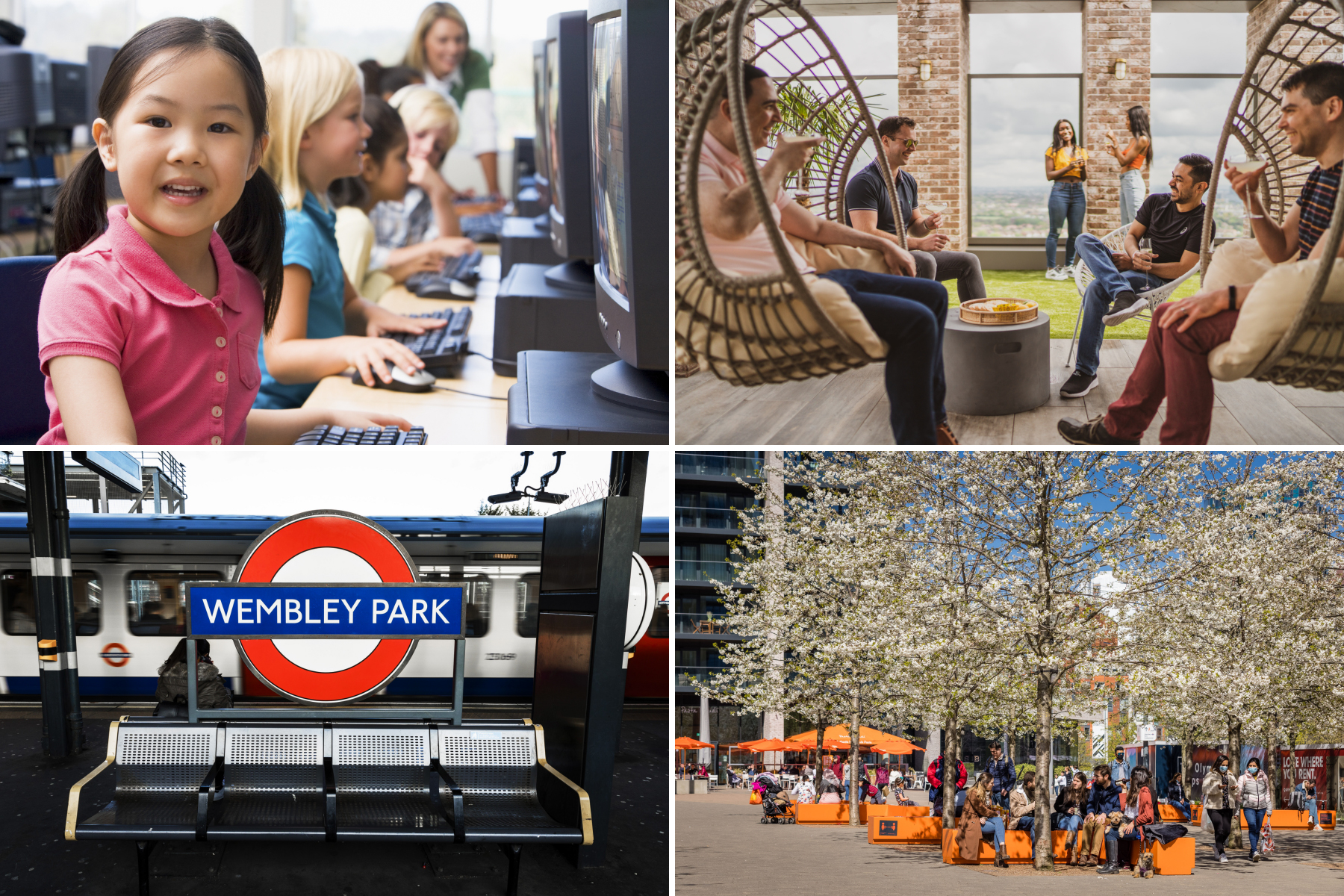 Wembley Park may be a self-contained community, but there are also many places to explore in the wider area. The High Road is home to many popular vegetarian restaurants and the Loon Fung supermarket is a comprehensively stocked oriental grocery, located just two miles away. This has become very popular with the area’s growing Chinese community.

There are also some alternative transport options in the area. Wembley High Road Station is on the Bakerloo Line Underground network that runs southwards to Paddington and the West End. Wembley Stadium Station is part of the Chiltern network which connects to Marylebone in just 13 minutes.

Top-performing schools are one of North West London’s built-in features and Wembley is well situated for reaching many of the best. The Ark Academy has consistently been rated as outstanding and has a thriving sixth form program. There are many good junior (primary) schools too and secondary schools within easy walking distance.

For those seeking an Independent education, the Harrow School, North London Girls Collegiate School and ACS International School are all an easy commute away and many elite schools have their own coach service which passes through Wembley.

Wembley Park is in Zone 4, but because the Metropolitan line only stops once on its way to Baker Street, journeys into Central London only take 12 minutes making it a super convenient location for professionals doing their daily commute into the West End and City. This winning combination of Zone 4 rents and Zone 2 commute times is already proving to be popular with those working in the financial, media and education sectors, plus anyone else who requires quick access to the M40 and M4 tech corridors that radiate outwards from North West London. Undergraduates studying at University College London and London School of Economics can get from Wembley Park to their lecture theatres in well under half an hour.

Wembley has built on London’s reputation for being the welcoming face of a nation determined to give opportunities to the brightest and best that come to these shores. Living within walking distance from the iconic arch is bound to fill anyone with optimism. From the vibrant flags and street art that catch the eye by day, to the inspirational light shows that project from the arch at night, this is where talent and opportunity shake hands.

Rentals at Wembley Park start from £1,200 per month. Get in touch for the latest information and availability.