Nursery rhyme withstanding, London’s bridges are very much a part of city life, but how many can you name? Follow our guide and next time you ride a bus over the River Thames, remember our fascinating factoids… 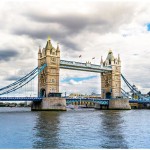 1. Tower Bridge, the stuff of childhood memories and school trips to neighbouring namesake, the Tower of London, it celebrated its 120th birthday last month. Built in 1894, its lofty turrets hold two horizontal walkways and bascules, which were built to enable tall-masted ships to access the port of London. In 2000, a computer system was introduced to control the bascules remotely, but in December 1952, a number 78 double-decker bus got caught short as the bridge opened. Driver Albert Gunter made a split-second decision to accelerate, clearing a three-foot gap to drop six-feet onto the north bascule which had not yet started to rise. The City Corporation rewarded him £10 for his bravery.

2. The Romans kicked us off in AD55 with a timber bridge, but it was King Henry II who commissioned a stone bridge in 1176 which today is well known at the London Bridge. Evolving into a heavily congested living and working space (hence the nursery rhyme which alludes to the bridge’s deterioration) it was replaced in 1831. Less than 100 years later, the bridge was progressively sinking and so the City of London put it on the market. Bought by Missourian Robert P. McCulloch (who denied he had mistaken the purchase with the more ornate Tower Bridge) for almost $2.5m, it was rebuilt in Lake Havasu, Arizona where it still resides. Today’s London Bridge was opened by Queen Elizabeth II on 17 March 1973. 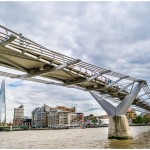 4. The London Millennium Footbridge didn’t get off to the most ignominious start when it opened in 2000. To mark the occasion, a charity walk had been organised on behalf of Save the Children but participants complained of an uncomfortable swaying motion, which saw the crossing dubbed the ‘Wobbly Bridge’. Closed the next day, the bridge remained shut for almost two years while adjustments were made to stabilise it.

5. Originally called William Pitt Bridge, it was more informally known as Blackfriars after a nearby monastery and this was later adopted as its name. Notoriety came in 1982 when Roberto Calvi, a former chairman of Italy’s largest private bank, was found hanging from one of its arches with five bricks and $14,000 in three different currencies in his pockets. Initially treated as suicide, Calvi had been accused of embezzlement and, in 2002, experts concluded he had been murdered by the Mafia.

6. Opened in 1945, Waterloo Bridge spans a bend in the River Thames that provides views of Westminster, South Bank and the London Eye in one direction and the Square Mile and Canary Wharf in the other. While the city skyline has changed over the years, the stunning view inspired The Kinks’ 1967 track, Waterloo Sunset. It is the only bridge to have been damaged by German bombers during World War II. 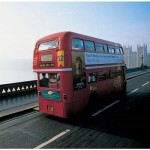 7. Spot the difference time. Westminster Bridge is painted green, the same colour as the leather seats in the House of Commons, which is on the side of the Palace of Westminster nearest the bridge. By contrast, Lambeth Bridge is red, the same colour as the seats in the House of Lords and is on the opposite side of the Houses of Parliament. Having been painted by Canaletto and an inspiration to Wordsworth, Westminster Bridge has appeared in Monty Python, 102 Dalmatians and Doctor Who on three occasions.

8. Chelsea Bridge has endured several controversies over the years. First built as Victoria Bridge in 1857, it became structurally unsound and was renamed Chelsea Bridge to avoid the royal family’s association with a potential collapse. Rebuilt in 1937, from the 50s motorcyclists staged regular races across the bridge and in 1970 a fight erupted between rival Hells Angels, resulting in a death and the imprisonment of 20 people. During the 70s, Chelsea Bridge was painted red and white, prompting complaints from Chelsea Football Club fans that it bore the colours of rival London team Arsenal, but in 2007 it was redecorated in a red, blue and white scheme.

9. Much like the Millennium Bridge, Albert Bridge was nicknamed ‘The Trembling Lady’, thanks to its tendency to vibrate when large numbers of people walked over it, and signs were erected warning troops to break step while crossing the bridge. Opened in 1873, it is one of only two Thames bridges never to have been replaced. 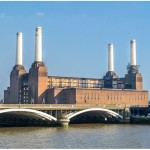 10. Battersea Bridge was built to replace a ferry service that had been in operation since the mid 16th century. Although a stone bridge was planned, investment was lacking and a wooden bridge designed by Henry Holland was opened in 1771. Painted by Turner and Whistler, Battersea Bridge remained the last surviving wooden bridge on the Thames until it was replaced with the existing structure, designed by Sir Joseph Bazalgette in 1890.

11. A feat in simplicity, Wandsworth Bridge’s unadorned steel opened in 1940 and was painted in dull shades of blue as camouflage against air raids. One of London’s busiest bridges, carrying more than 50,000 vehicles a day, it has been described as ‘probably the least noteworthy bridge in London’. 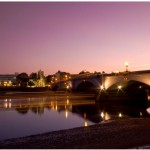 12. Officially Putney Bridge, but often called Fulham Bridge, this is a crossing with history. The story goes that in 1720 Sir Robert Walpole, later England’s first Prime Minister, was returning from a visit to George I at Kingston on Thames. In a hurry to get to the House of Commons, he arrived at Putney to find the ferry boat was on the other side of the river and the waterman drinking in the Swan. When his calls were ignored, he was forced to ride on and Walpole vowed that a bridge would replace the ferry. Since 1845, The Boat Race has set off from Putney Bridge and, for the first time in 2015, women’s eights will compete from here for the first time. 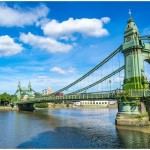 13. Despite two attempts by the IRA to blow it up, Hammersmith Bridge remains resolute in enabling pedestrians and vehicles to cross from Hammersmith to Barnes. In a touching tale, on 27 December 1919, Lieutenant Charles Campbell Wood dived from the bridge to rescue a drowning woman. He later died from tetanus as a consequence of his injuries, but a plaque on the handrail marks his act of bravery.

Fancy waking up to the view of one of these famous London landmarks? Why not contact the offices at Canary Wharf, Chelsea, City, Docklands and Imperial Wharf to secure that perfect year-round vista.