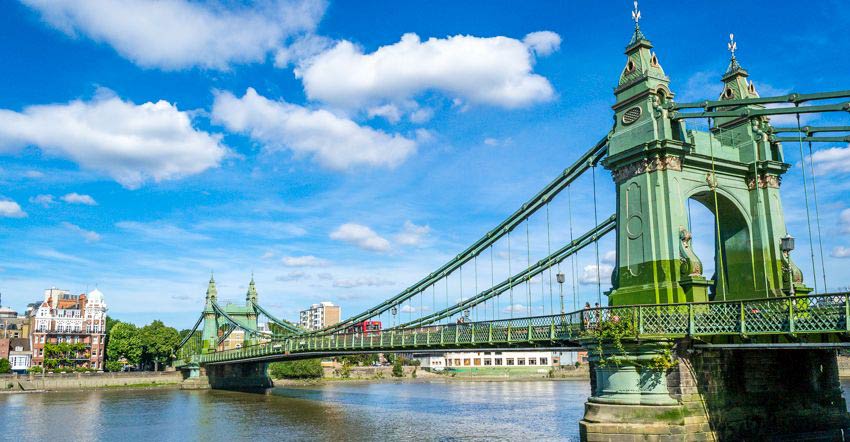 Bursting with life and culture, Hammersmith continues to attract people from all over the world, thanks to its cultural diversity, local nightlife and riverside setting. Located on the fringes of the River Thames in West London, it’s a perennially popular area for people who are looking for rental accommodation in London and with the recent launch of the high-spec apartments at the Fulham Reach development, we expect the area to be more in demand than ever.

One of Hammersmith’s claims to fame dates back to the 18th century when two talented gardeners James Lee and Lewis Kennedy, founders of The Vineyard Nursery, were responsible for introducing new species of plants to the UK, many of which are still around today.

Since that time, the area has transformed from a key manufacturing centre to a thriving commercial district, with global corporations choosing Hammersmith as their London headquarters.

Hammersmith offers a mix of period buildings and new developments. Its setting along the Thames has made it popular with developers who are able to offer riverside living, in close proximity to the centre of the Capital, while keeping property prices relatively affordable.

Gooch House on Glenthrone Road is a modern development which is just a five-minute walk to Hammersmith Tube station. Rentals start from £400 per week. Sovereign Court, designed by St. George, will be a brand new development right in the heart of Hammersmith. The development will offer contemporary London apartments, with amenities such as a fitness suite, private underground parking and a 24-hour concierge. Due for completion in summer 2016, it’s already in high demand. 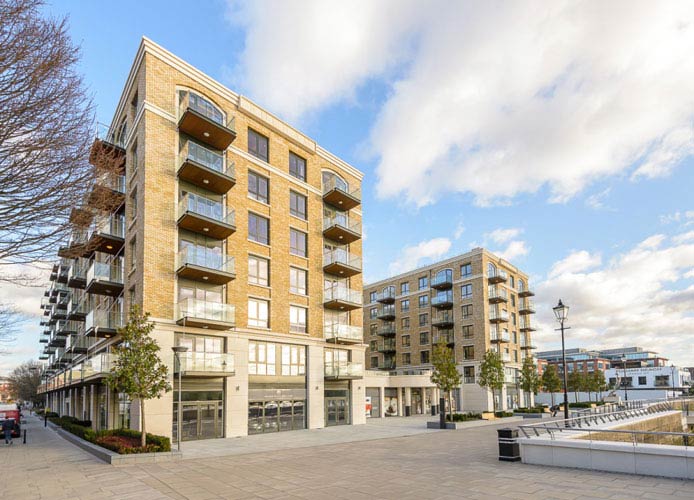 One of the area’s newest developments, Fulham Reach, also designed by St. George, is surrounded by beautifully decorated landscaped gardens, set against the backdrop of the River Thames, offering views across Hammersmith Bridge and beyond. The development offers 600 homes comprising of studio, one, two and three bedroom apartments which are bright and spacious throughout. With contemporary décor, the apartments include floor-to-ceiling windows, marble bathrooms and private balconies accessed via the reception areas.

There’s a selection of outstanding on-site amenities which add to the high-end living experience the development offers. These include a dedicated 24-hour concierge, exclusive residents’ gym, spa, swimming pool, private cinema and even a virtual golf simulator for those who might fancy themselves as the next Tiger Woods.

The development is ideal for young professionals who want to experience similar lifestyles to those in Fulham and Chelsea but are deterred by the high-end prices. Rentals start at £475 per week for studios rising to £1,200 per week for three bedroom properties.

Benham & Reeves Estate Agents, Hammersmith branch has an office situated at the development, which means we can offer tenants the earliest access to these apartments, as well as many other properties in Hammersmith and surrounding areas.

Thanks to a vast amount of transport services and a Zone 2 location, travelling around London from Hammersmith could not be easier. The two Underground stations connect with the Piccadilly, Circle, District and Hammersmith & City lines. This multitude of options means you can be in popular West End areas such as Leicester Square in just 15 minutes, while Holborn can be reached in 20 minutes. City areas such as Farringdon in the City, take less than 30 minutes to reach.

Commuters also enjoy the benefit of the extensive bus network, based in the large station in the centre of Hammersmith. Such is its enormity, it’s divided into two sections: a lower and upper tier.

For drivers, Hammersmith offers a direct route to the M4. This means Heathrow Airport is easily accessible, meaning a last-minute weekend trip becomes a convenient reality. Of course, the M4 doesn’t just offer access to Heathrow, but is also a gateway to the West of England and such popular areas as Windsor and the county of Berkshire. It also offers direct access to Wales.

Areas that surround Hammersmith include some of the most popular in London. Chelsea and Fulham, located in South-West London offer fashionable shopping experiences via the King’s Road and Fulham Road. Leafy Barnes is a short journey away, particularly popular with families due to its open spaces and countryside-like surroundings.

The area is one of London’s key commercial and employment centres. L’Oréal, Virgin Media, Disney and Harrods are just some of the major brands that have offices in Hammersmith, making it incredibly appealing to professionals. 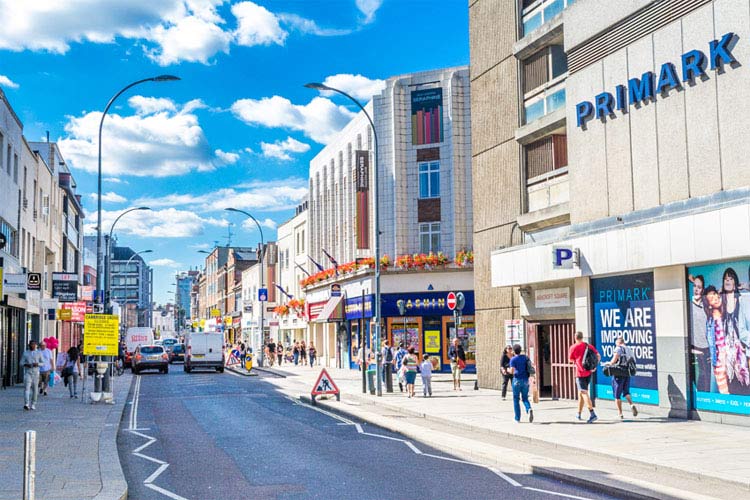 It’s not all work and no play though; Hammersmith is well-known for its entertainment. If it’s the pizzazz of theatre and performance you’re after, Hammersmith offers some of the best in London. The Lyric Theatre displays some of the Capital’s most exciting shows, while the Hammersmith Apollo showcases performers from modern pop groups to rock ‘n’ roll legends. Riverside Studios is undergoing a three-year redevelopment plan that will offer eclectic theatre shows, a private screening room and a cinema.

If the shopper in you is bursting to get out, fear not as the King’s Mall Shopping Centre has over 40 shops, which include high-street favourites such as River Island, Tiger, H&M and Foot Locker. There are also a number of eateries to enjoy in the shopping mall.

Heading outdoors, King Street continues the shopping experience with chain and independent shops lined along the street. And if that’s not enough, Broadway Shopping Centre is attached to Hammersmith Tube station, offering even more retail therapy.

No area would be complete without a good selection of restaurants to dine in. Fortunately, Hammersmith offers a diverse range of eateries that offer global cuisine including Indian, Italian, Polish and Vietnamese restaurants.

The River Café, close to the Fulham Reach development, is an Italian Michelin-starred restaurant that has been open since 1987. It’s noted for some of the famous chefs who have learnt their trade there, including a certain Jamie Oliver.

That’s a mighty fine bridge you have

Hammersmith Bridge is one of the most iconic bridges in London and is often a photo-grabbing opportunity for any tourist visiting the area. The suspension bridge is Grade II-listed and was designed by civil engineer Sir Joseph Bazlagette. Constructed in 1824, it was the first suspension bridge in London. Why not take a look at our London Bridges Blog for more information on some of the Capital’s historic bridges?

Other places of interest include 7 Hammersmith Terrace, the former residence of Sir Emery Walker, a printer, collector and friend to mentor William Morris, founder of the Arts and Craft movement. Open to the public from April to September, enjoy browsing well-maintained interiors with traditional and stylish designs. The house is full of character thanks to Morris’ wallpapers and textiles. The scenic garden is a particular delight and overlooks the river.

Kelmscott House Museum was the home to William Morris and where he spent the last 18 years of his life. The beautiful house was a hub of creativity and is opened two days a week to the public, where they can enjoy free painting demos from the museum’s artist in residence.

With a prominent West location, riverside setting, abundance of amenities and new developments adding excitement to the area, now really is the time to start thinking about living in Hammersmith. Check out our listings page for the latest W6 properties or send us an email for more information.