The luxury life in Kensington

W8 is the postcode of choice for anyone looking to live in prime central London and the Royal Borough of Kensington and Chelsea offers a luxury lifestyle with a capital L. Renting a property in Kensington means you will be in the distinguished company of the likes of local residents David and Victoria Beckham, Stella McCartney, Sir Elton John, Eric Clapton, Rowan Atkinson and Bernie Ecclestone.

Properties in Kensington are generally made up of period buildings from the Victorian and Georgian eras. These are often red-brick or white-stucco fronted buildings, many of which have been converted into apartments yet still retaining charming period features. This one bedroom apartment in Kensington Court is an example of the type of property you will find in the area.

375 Kensington High Street might not be a period building but the new development more than meets expectations when it comes to high-end living. Designed and developed by St Edward, part of the Berkeley Group, there are a selection of studio, one, two and three bedroom apartments. Benefits include sleekly-designed interiors, well-known appliances and Home Network Systems, allowing you to control the electronics for each apartment via one device. The apartments have been designed with luxury and convenience in mind. On-site amenities include a Harrods-trained concierge, state-of-the-art gym and a private cinema for residents. Rentals start from £550 per week.

Kensington has a wealth of travel options, including three Underground stations and an Overground station, spread over Zones 1 and 2. For those interested in properties close to the high street, High Street Kensington Tube station is served by the Circle and District lines. The station has services to the City in less than 20 minutes.

Kensington Olympia is served by the Overground, which offers good connections into the North, South and East areas of London. West Kensington Underground, on the District Line, offers services to Westminster in 15 minutes and Blackfriars in 20 minutes.

The Royal Borough of Kensington and Chelsea attracts some of London’s wealthiest residents for a reason; not only does Kensington offer prime living in London, but nearby areas such as Knightsbridge, West Brompton, Holland Park, Chelsea and Sloane Square make up a collection of sought-after areas in the Capital. These areas are all a short journey away from Kensington, offering residents in the W8, W14 and SW7 postcodes plenty of options when it comes to luxury living in London. 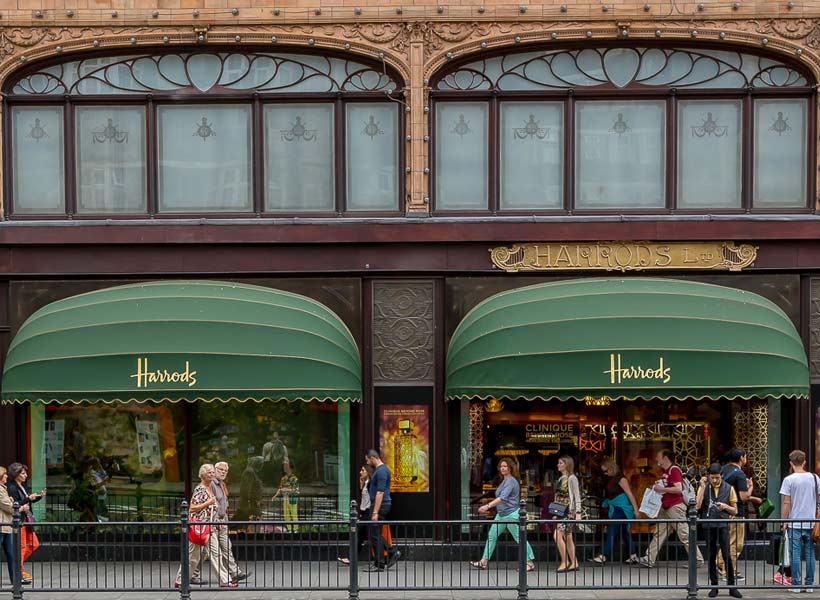 Just off Kensington High Street, Kensington Church Street and Holland Street both offer stylish boutiques and popular retail favourites such as Topshop and Gap. It’s not quite as busy as the West End, meaning shoppers can spend more time browsing, without the hustle and bustle usually associated with London’s most famous shopping street.

South Kensington is filled with boutique shops, delicious patisseries and a blend of chain and independent restaurants. Often referred to as ‘South Ken’ by the locals, you get to understand the level of affluence in the area, especially as you stroll by the Ferrari shop, where people go just to take a selfie of themselves next the latest models of one of the most sought-after car brands in the world.

Keep strolling down South Kensington along the Old Brompton Road, and in less than 15 minutes you will find yourself in Knightsbridge, where you can continue your retail therapy. Harrods and Harvey Nichols sit comfortably in Knightsbridge, being two of the most famous department stores in the world. A-list designers such as Armani, Channel and Louis Vuitton all call Knightsbridge home.

If you want to dine at a selection of restaurants from quaint cafes to Michelin-starred delights, Kensington is the place to go. Under the guidance of renowned chef, Mark Kempson, Kitchen W8 is a relaxed, neighbourhood restaurant which also happens to have a Michelin star. Close to Kensington Gardens is a true hidden gem, Launceston Place, which under the eye of Tim Allen also has a Michelin star and recently won Tatler’s award for “Best Fine List”. Bluebird is situated on The King’s Road, near South Kensington and is a local neighbourhood restaurant that is grand in scale, offering fine European cuisine. Ffiona’s, on Kensington Church Street, is one of the oldest run family restaurants in London. The restaurant specialises in British dishes and has built up following from locals as well as celebrities. Finally, local hang out “Maggie Jones” serves the best in British fare including a wealth of game.

Kensington has a wealth of local attractions to visit, including Kensington Palace,a royal residence set in Kensington Gardens, where you can visit the Queen’s State Apartments, browse through fashion trends throughout British history, and visit the King’s Gallery, which contains paintings of the Royal Collection.

The Royal Albert Hall is an iconic building on the edge of South Kensington. It is a concert hall most famously known for hosting The Proms, since 1941. Opened in 1871, it has been the performance venue for many famous musicians during its 144-year history.

There are three popular museums in Kensington: The Natural History Museum, which exhibits a vast range of specimens from various areas of natural history. The Victoria and Albert Museum is the world’s largest museum of decorative design and arts, housing permanent collections of over 4.5 million objects – make sure you give yourself plenty of time to stroll around and see as many as you can. The Science Museum is located on Exhibition Road, next to the V&A museum and was founded in 1857. It’s free to enter and displays a number of exhibitions showcasing the wonders of modern science.

Kensington is in high demand, with many professionals and families looking for convenience, great shops, pretty buildings, five-star restaurants, historic attractions and a more relaxed atmosphere than neighbouring Knightsbridge and Mayfair. If you want to see the best of what Kensington has to offer, view our listings, or contact a member of our team at our Kensington office.

If Kensington rentals are not within your budget but you need to be in West London, take a look at our guides to living in Hammersmith W6 or Ealing W5 where you can still find good quality accommodation and amenities at more affordable rentals.