London is firmly in the age of the flexi-venue and it’s making for some intriguing mashups as buildings continue to be repurposed. This month alone will see cakes displayed in an old brewery, beer drunk in an exhibition space and DJs spinning from one of the highest points in Europe. The architects of old might not have envisioned it but it’s a sure fire way of keeping buildings fresh and relevant and that’s what we love about London.

This is the two-wheeler version of the London Marathon and it’s as eclectic and as welcoming as that famous footrace. The event is split up into different levels of ability as letting a huge mass of cyclists onto the road is a much bigger risk than thousands of runners, most of whom would barely exceed 10mph.

The Surrey 100 is the longest course and covers the southwestern suburbs of London before swinging out into the Surrey countryside and back again. The Surrey 46 is a shorter route that sticks closer to the Capital and there is also a pro event that takes place later. Participants are encouraged to embrace several charitable causes and to ride in groups. All races start from the Olympic Park and end in the Mall.
https://www.prudentialridelondon.co.uk/ 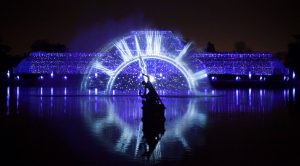 Kew Gardens are past masters at combining awesome plant specimens with man-made wonders and the Chihuly Nights event is one of their most inspired pairings yet. Dale Chihuly is one of those rare artists who have created a genre that is instantly recognisable.
Light, sound and form are all intertwined in his glass creations and his inventive use of colour means that the installations are best viewed at night. It is then that they take on an almost organic appearance that is eerily plant-like and with specially composed soundtracks, a visit to the event seems like an immersive cinema experience.
https://www.kew.org/kew-gardens/whats-on/chihuly-nights 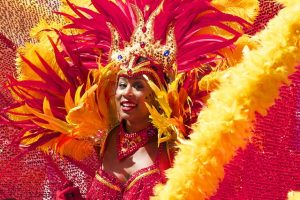 The diverse communities that make up the area around Notting Hill get their chance to strut their stuff on August bank holiday weekend. That being said, Europe’s leading celebration of Afro-Caribbean culture is still a largely island affair with ad hoc sound systems and customised floats. However, the organisers will continue to emphasise the collective strength and vibrancy of the district which is well known it’s stunning period townhouses that live cheek-to-cheek with modern housing and council blocks.

Notting Hill Carnival is a kaleidoscope of exotic senses. Seismic sub bass rumbles and the hissing and spitting of Caribbean bbq seem to come from all directions. Deceptively strong rum-based beverages are a great way to get in the mood for seeing out the summer. The live stage is just under the Westway flyover and is the ideal place to catch a selection of homegrown and international reggae performers.
https://www.thelondonnottinghillcarnival.com/

One of the most convivial summer gatherings takes place at the Kensington Olympia as the Great British Beer Festival turns a fairly sterile space into a giant pub. Nowadays, beer aficionados are being spoilt for choice in London, but this event is definitely on their collective must-see list.
Brewing might be trendy at the moment with all manner of quirky brands about, but the people behind GBBF are in it for the long haul and that means a focus on local produce from areas with a rich history of beer making. There is, nevertheless, still a sizeable hipster contingent at the event and most breweries will be operating funky pop-up bars. Beer tasting sessions, pub games and live music will also feature.
https://gbbf.org.uk/

The iconic centre of London’s soul is more than just an attractive landmark. A place of worship that has inspired hope and rebirth through many dark times, St Paul’s is also a rich source of history and culture: a living museum, you might say. Taking in this heritage isn’t easy during the daytime hours as waves of tourists tend to make leisurely investigation impossible, but these new opening hours are about to change all that.
Summer Lates is a programme of curated tours that tap into the atmospheric aesthetic of Wren’s masterpiece. This vibe is especially tangible after dark as shadows lengthen around the various chapels, tombs and crypts. There is also an opportunity to view the London skyline from the top of the celebrated dome.
https://www.stpauls.co.uk/visits/visits/summer-lates

An expertly made expresso martini has to be one of the most discreetly wicked cocktails to be found in the Capital. Fronted by a hi-caffeine kick and rounded of by that distinctively mellow vodka buzz, this is a drink for party people who have grown-up.
Mr Black are purveyors of a high-quality coffee liqueur and are intent on promoting it as an essential ingredient of any good coffee based cocktail, which has led them to start this festival. Expresso martinis containing the Mr Black brand will be on sale in select London bars and will cost only £6.
https://drinkup.london/our-festivals/22671/mr-black-espresso-martini-fest/

The great thing about creating desserts is that you can let your inner child roam free and still end up with something that everyone likes. At the Old Truman Brewery, inner children will not only roam, but will stage a major takeover as sweet toothed artisans display some of the most inventive, daring and bonkers creations.
From whipped cheesecake combinations to alcoholic popsicles, there’s something for everyone as visitors will be able to try small samples of the truly delicious treats on offer. Customised patisserie is something of an internet sensation, so look out for appearances from leading influencers as they extol the virtues of the “Crownie” (cookie/brownie) or the latest line of mini macaroons.
https://londondessertfestival.com/ 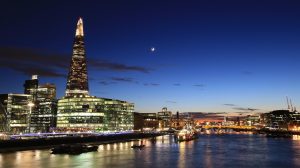 Skyscrapers are going up in the City at an unprecedented rate, yet the big name across the river stays cool – and with good reason. All this high rise activity is actually improving the view from London’s iconic mega-needle, giving visitors more and more to look at.
Not content to rest on their visual laurels, the people at The View From The Shard are giving viewers something to listen to as well. The Shard Sessions is a series of curated music events that are centred around prominent DJs and incorporate live elements. Watch the sun go down over London along to blissed out euphoric beats.
https://www.theviewfromtheshard.com/whats-on/shard-sessions/
Share

Can my landlord evict me?