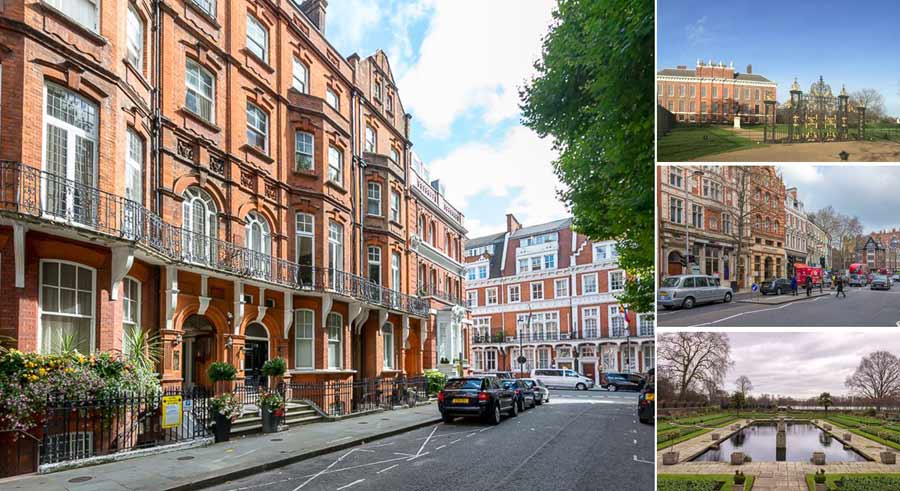 A fascinating mix of historic architecture and progressive thinking, Kensington has always been internationally recognised as one of London’s most desirable places to live in. Being part of an affluent Royal borough gives it the kind of look and feel that fits in perfectly with the aspirations of working professionals who are considering a new rental home in London. With Kensington containing more than its fair share of celebrity residents, they may well find themselves living near the likes of Sir Elton John or catch David Beckham out and about on his morning run.

Separated from the city centre by a vast urban park, Kensington overlaps Underground Zones 1 and 2 and contains streets that take in the W8, W14 and SW7 London postcodes. Because of this extensive reach, it’s helpful to regard South and West Kensington as separate from, but connected to, the main High Street.  Kensington’s large size means that there is more to the neighbourhood than just super luxe enclaves as different streets take on their own distinctive character.

The area around Kensington High Street is the place to find the wrought-iron railings and stucco facades that give the neighbourhood its characteristic look. Kensington Court, an immaculate red-brick mansion block with views of Hyde Park, is eminently suitable for fans of such Victoriana.  Apartments here are built for purpose containing all the exquisite details that are associated with “traditional” Kensington. Rents start from £525 per week for a one bedroom apartment, £895 per week for a two bedroom to £2300 per week for this grand four bedroom apartment. Just a short walk away, the buildings of Kensington Square overlook a tranquil green space that is immaculately kept and for private use only. A one bedroom flat in one of these Grade II listed beauties can be rented for around £415 per week. Situated just around the corner from Kensington tube station, both of these locations are ideal for local shopping expeditions, easy access to the various Royal parks and quick journeys into the West End.

West Kensington is situated towards the end of the High Street and is slightly less prestigious, but still contains fine red-brick examples of Victorian building prowess. The big news here is that some tasteful new property developments are beginning to bring variety to the area. Corporate high flyers appreciate history as well as the next person but they also value space, convenience and state-of-the-art amenities. Newcomer 375 Kensington High Street provides these features in abundance and even though the tube station is a bit further away, it still has a lot going for it. Developer St Edwards, have packed these one, two and three bedroom apartments with imaginative interiors, luxury kitchens and cleverly designed home electronics. A private gym and cinema are available to residents but what really stands out is the concierge service. Rents here are from £595 -£725 per week for a one bedroom apartment while two and three bedroom apartments are from £875 and £1150 per week, respectively.

The museum quarter of South Kensington is typified by cobbled mews streets, tree-lined squares and pristine architecture from the 18th and 19th centuries. These streets are centred around a meticulously planned (by the Victorians) complex of museums, scientific societies and concert halls. Dubbed “Albertopolis”, due to the proliferation of monuments to Prince Albert that dot the landscape, the area is also popular with students studying at the nearby Imperial College. Wealthy international post graduates can rent a studio in Roland House for £550 per week or a well presented one bedroom apartment on Cornwall Gardens for £595 per week.

Kensington is bisected by many Underground routes which make it a convenient, central location to commute to the City and West End from. High Street Kensington is on the Circle and District line which enables travellers to reach the rest of Zone 1 with consummate ease. South Kensington station is two stops westward and is also on the Piccadilly line that runs to all five Heathrow Airport terminals. Kensington Olympia station is on the newly revamped Overground system. This orbital network allows passengers to link to Zone 2 neighbourhoods throughout the Capital without having to travel through its centre. Journeys into the Square Mile take about 20 minutes.

As a shopping and dining destination, Kensington rivals the West End in terms of both variety and quality. Classic period furniture can be found on Kensington Church Street, whose quaint line of antique shops run all the way up to Notting Hill. South Kensington is home to many small independent art galleries as well as the world-famous Natural History and V&A museums. Between these two cultural hotspots, the various high-end fashion outlets of High Street Kensington supply hours of designer retail therapy. From the roof terrace party atmosphere of Babylon to the understated excellence of Launceston Place, Kensington’s restaurant scene has always been a thriving concern. The presence of a French cultural centre and school near South Kensington station gives the place a distinct air of Gallic panache. Residents here can enjoy the authentic French patisseries and bistros that are practically on their doorstep. Two large parks dominate the local geography and between them they provide a wide range of recreational options. At the eastern end of Kensington, the massive Hyde Park backs onto Kensington Gardens and its lake, horse riding and bandstand have been a part of London tradition for centuries. Holland Park is smaller, more ornate and its western location make it less of a tourist magnet. Tennis courts, an open air opera space and a beautifully sited restaurant – The Belvedere – are the main attractions, here.

Less buttoned-up than Knightsbridge and nearer to the West End than Chelsea, Kensington strikes a happy medium for tenants who desire to combine luxury surroundings with a cosmopolitan outlook and proximity to all the vital parts of London. Viewing our property listings is an excellent way of getting a feel for what kind of apartment you are looking for in Kensington and our lettings team is just a phone call away with plenty of advice about where to live in this historical enclave.